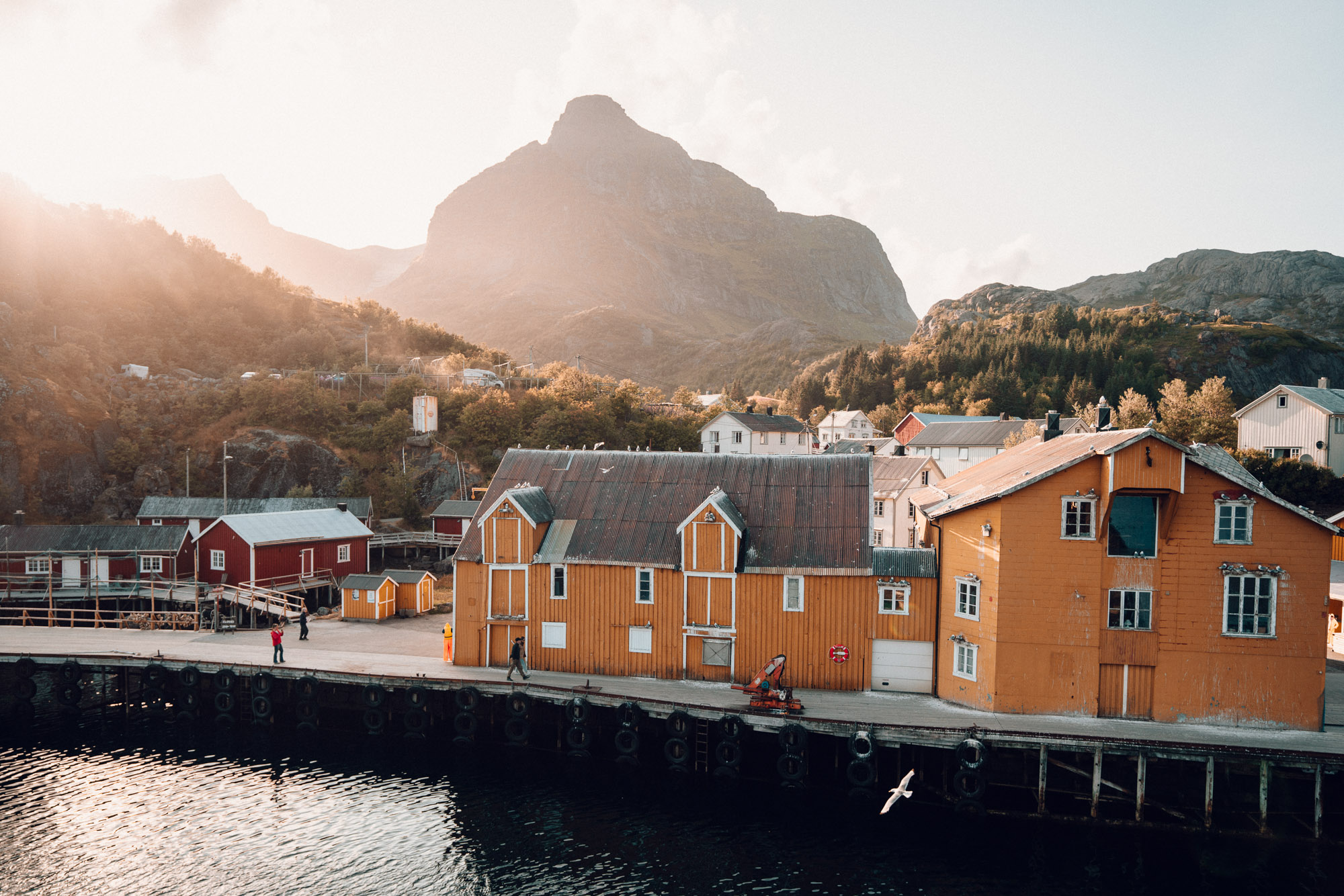 One of my favorite moments of any trip is the excitement of seeing a new destination for the first time. Lofoten, Norway was love at first sight. Even from our plane window, I could spot the quaint Norwegian cottages along the fjords and mountain ranges that make Lofoten so beautiful. We planned this trip mid-August, allotting five days in Lofoten before heading north for Svalbard.

Lofoten is a series of islands connected by winding roads and surrounded by jaw-dropping fjords on the Norwegian Sea. It’s known for it’s traditional fishing villages, which dot the mountains in hues of red and yellow. We opted to fly into Leknes, one of the main towns in Lofoten and conveniently located within thirty minutes of our chosen home base for the trip — Nusfjord.

There’s something about Lofoten that is simply magical. Though we visited in summer, it’s an incredible year-round destination offering diverse landscapes, delicious food, and plenty of outdoor activities. 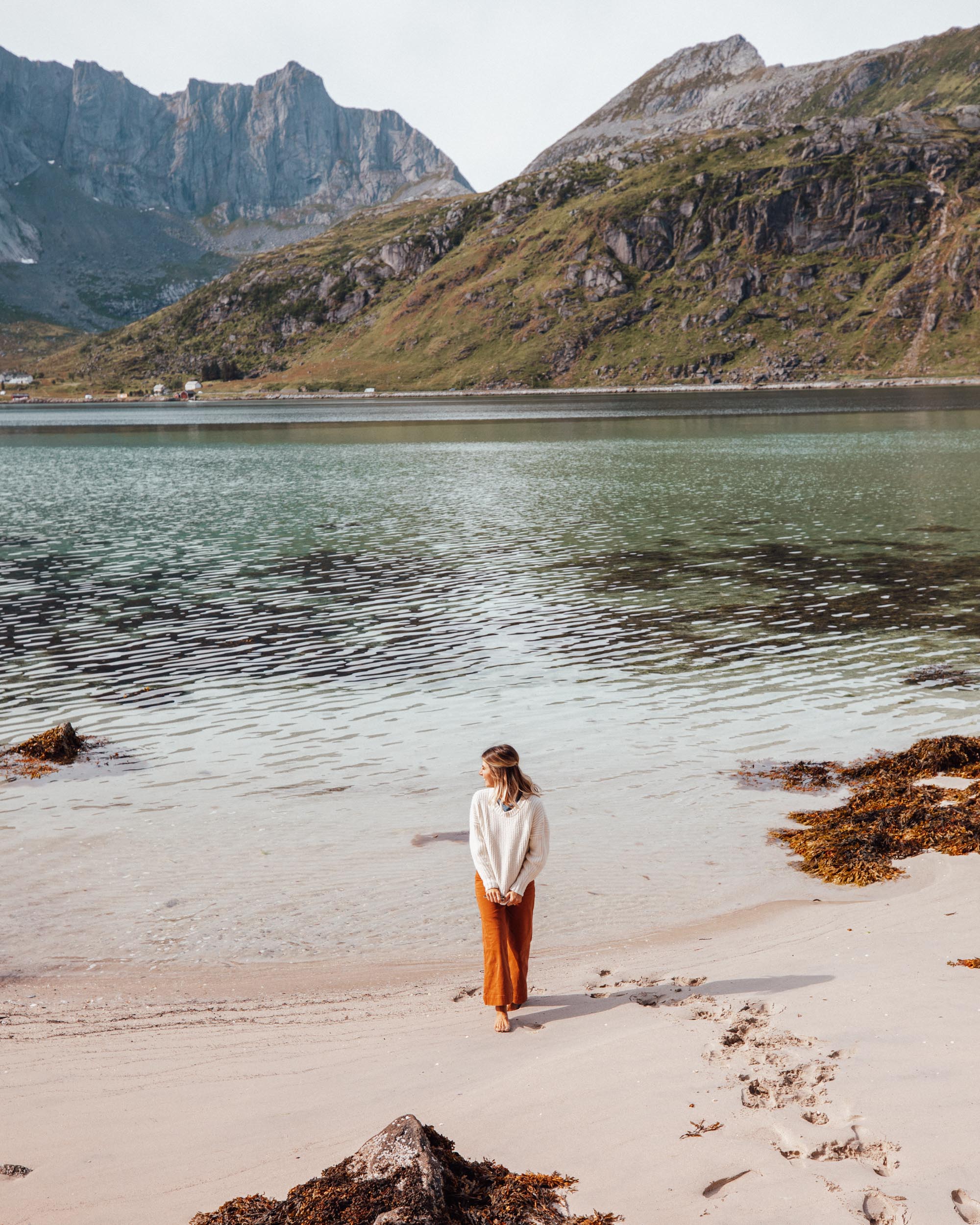 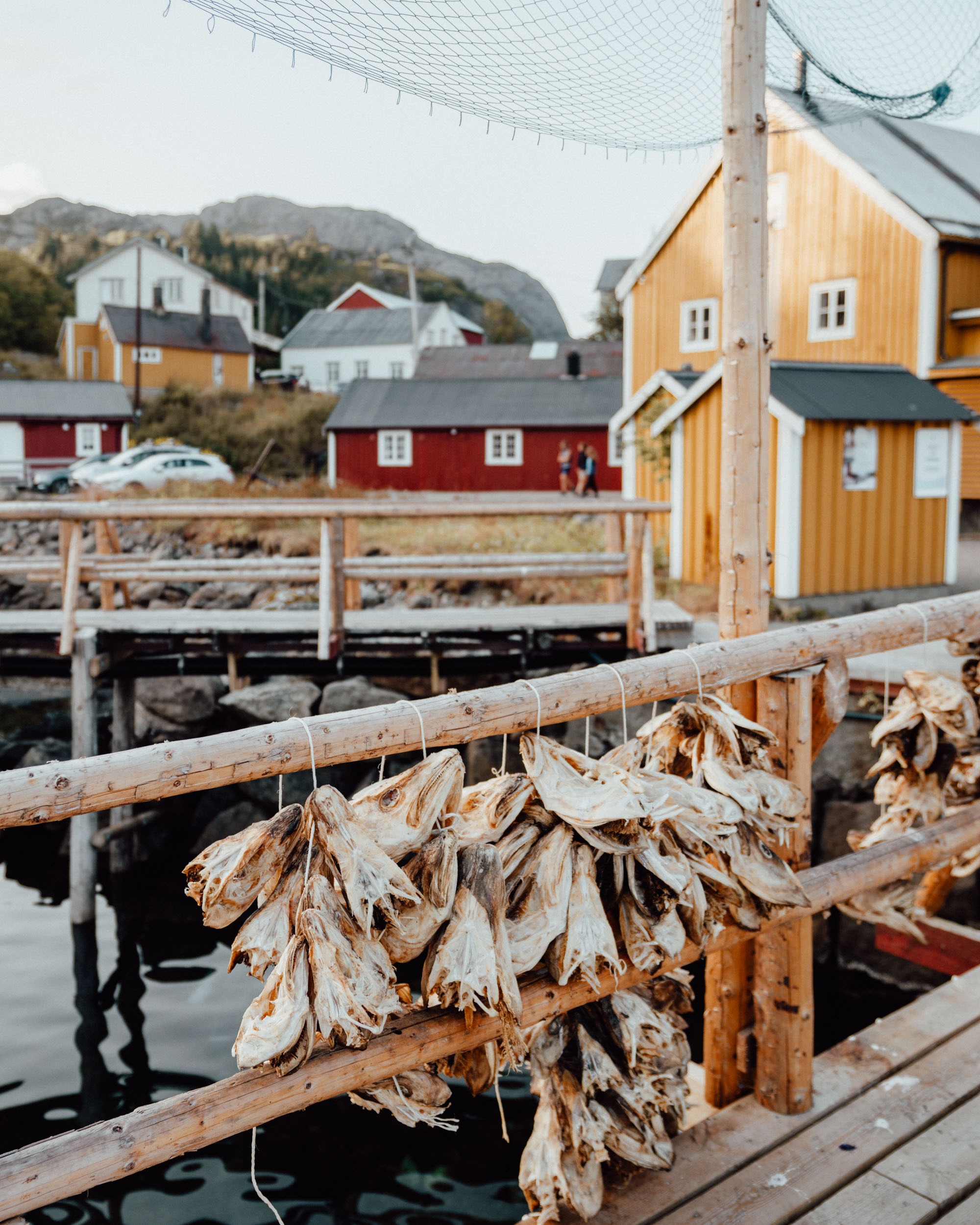 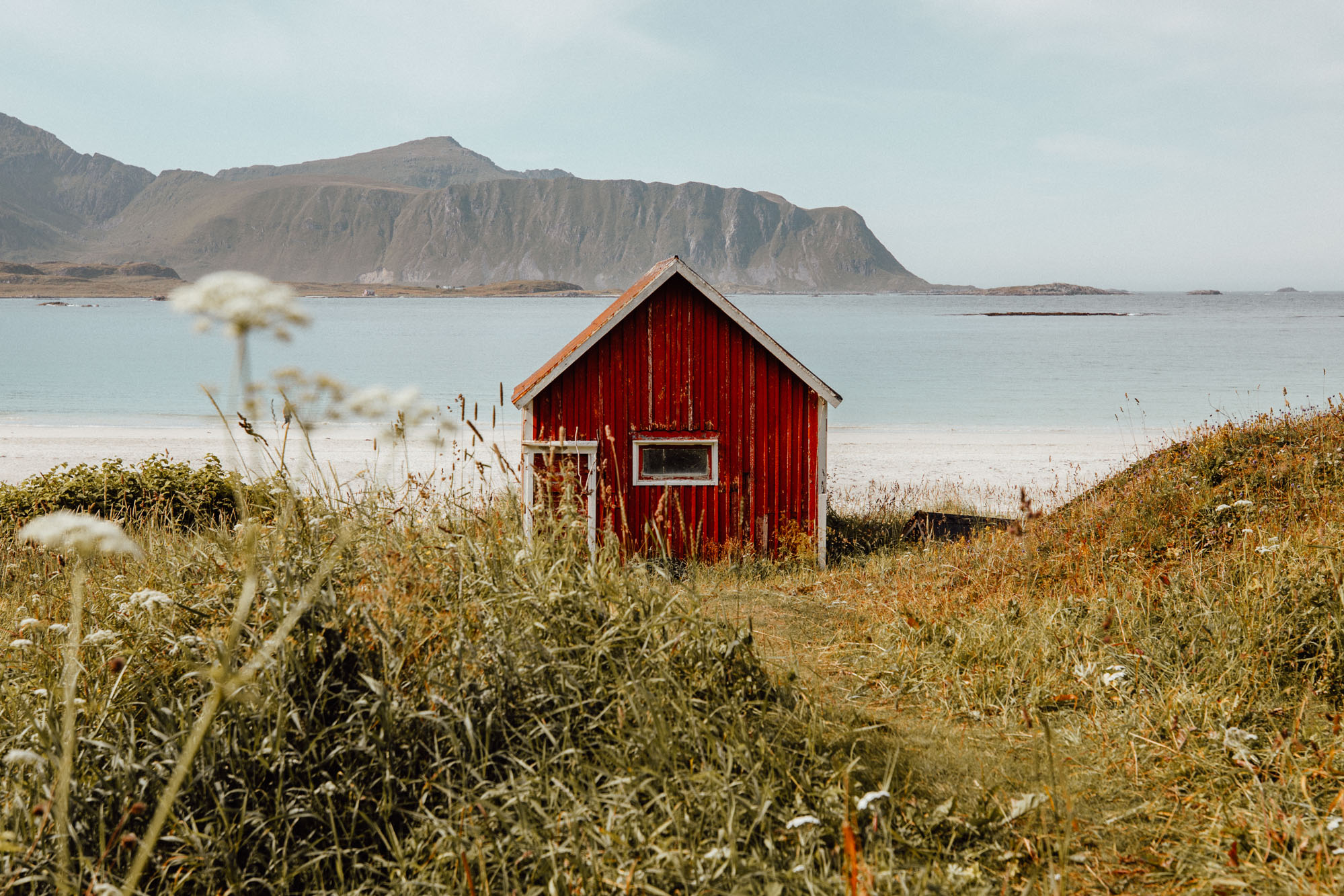 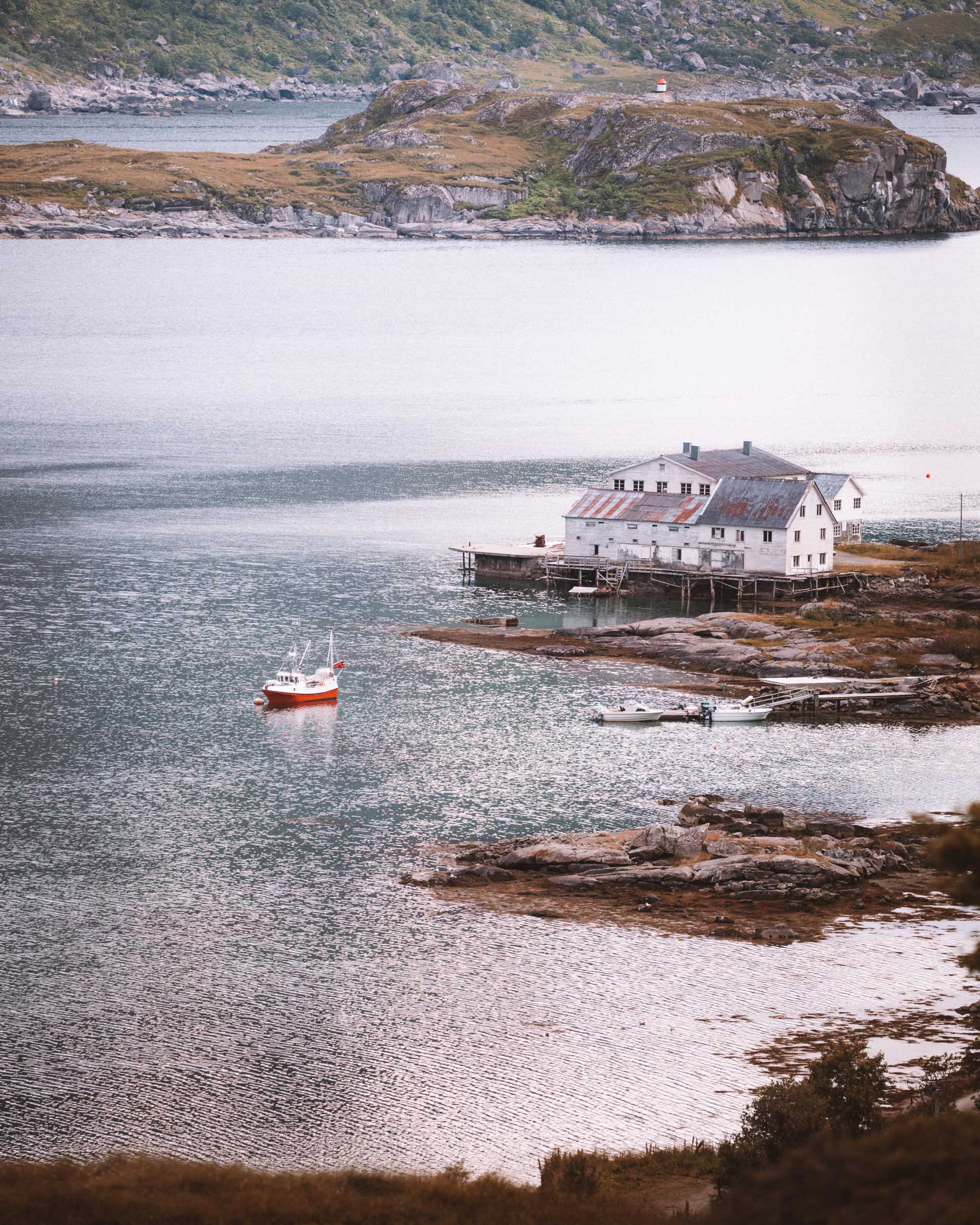 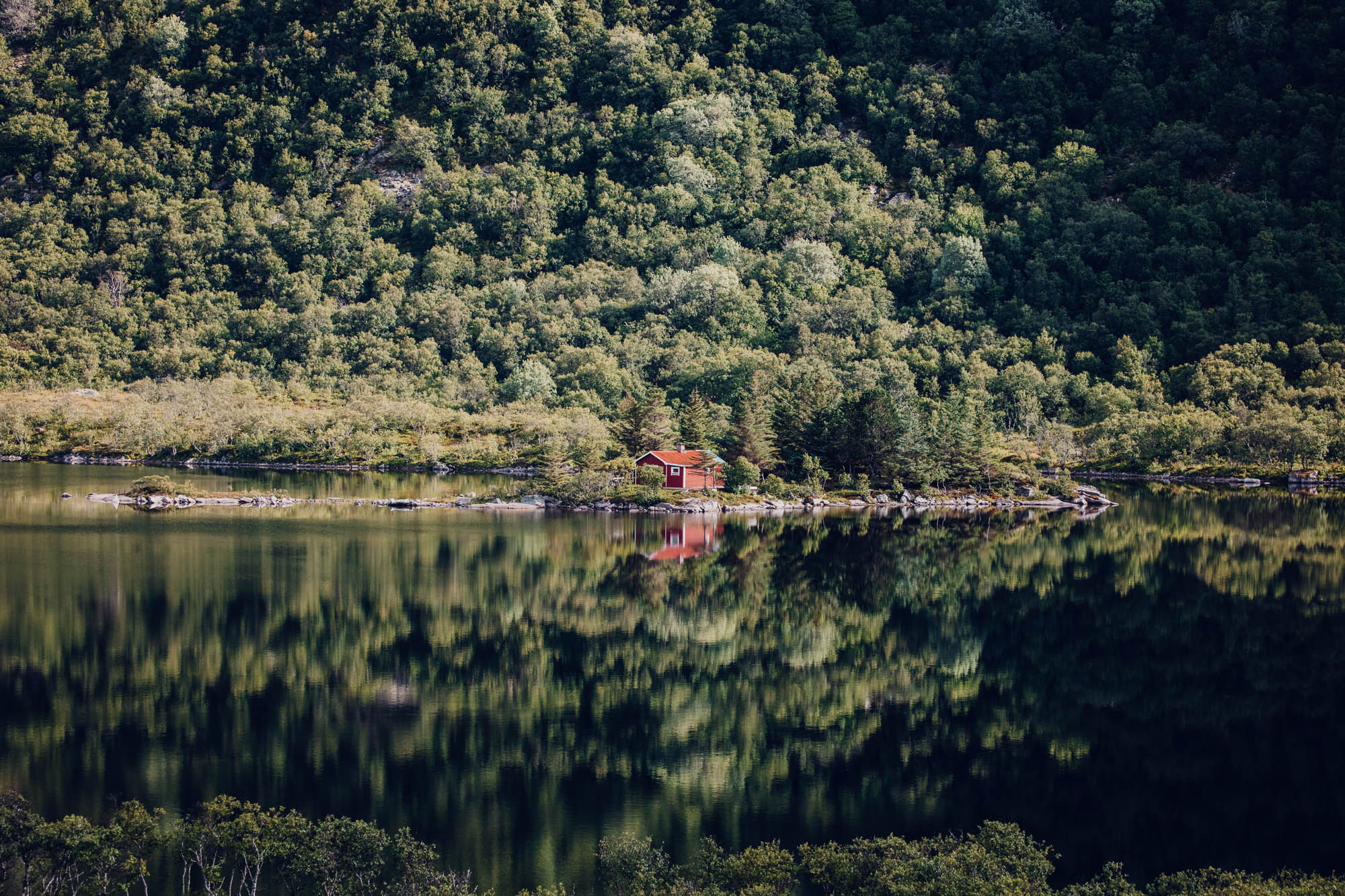 One of the most photographed towns in the region, located at the very end of the road.

An old fishing village with a harbor and traditional red Norwegian houses.

The is the most famous hike in Lofoten with a jaw-dropping lookout over the islands.

Often shown in photos of Lofoten, Reine is a walkable town with a number of shops and restaurants.

A tiny town known for one bustling lunch spot, close to the picture-perfect village of Hamnoy.

A quintessential Norwegian fishing town with red houses, most often shown in photos of Lofoten.

The most incredible winding road connecting tiny Norwegian islands – perfect for a drive.

A charming, preserved fishing village at the base of the fjords. We stayed in a hotel here.

A well-known town with multiple restaurants and accommodation options.

One of Lofoten’s larger towns located inland, with an airport nearby.

A scenic white sand beach juxtaposed against incredible mountains, with nearby hiking trails.

A popular beach and the location of the world’s most northern arctic surf resort.

Often photographed from above, Henningsvær features shops and cafes to explore on the water.

The largest city in Lofoten, with hotels, restaurants, galleries and shopping malls.

Best time to visit — year-round; summer from June through August is most popular for warmer weather and sun. It’s possible to see fall colors in October and November, and the northern lights in winter from December to March.

Getting around — rental car; this is a road trip destination.

Deciding where to stay in Lofoten was the toughest part of planning this trip. I wanted to make sure we were in a quintessential Lofoten town, but away from the crowds and still within driving distance of the most photogenic destinations. I also didn’t want exceptionally long drives each day, or repeat routes that would mean I hit the same towns twice.

After lots of research, I settled on Nusfjord Arctic Resort (Website | Link to Book) in the town of Nusfjord. It turned out to be absolutely perfect for us. Nusfjord is the only town in Lofoten that charges an entrance fee, so it keeps visitors at bay and means it’s completely quiet in the mornings and evenings – ideal for photos. It’s also located between Leknes (where we flew in) and Å (the very last stop on a Lofoten road trip), which meant we could drive a different direction each day and see something new. 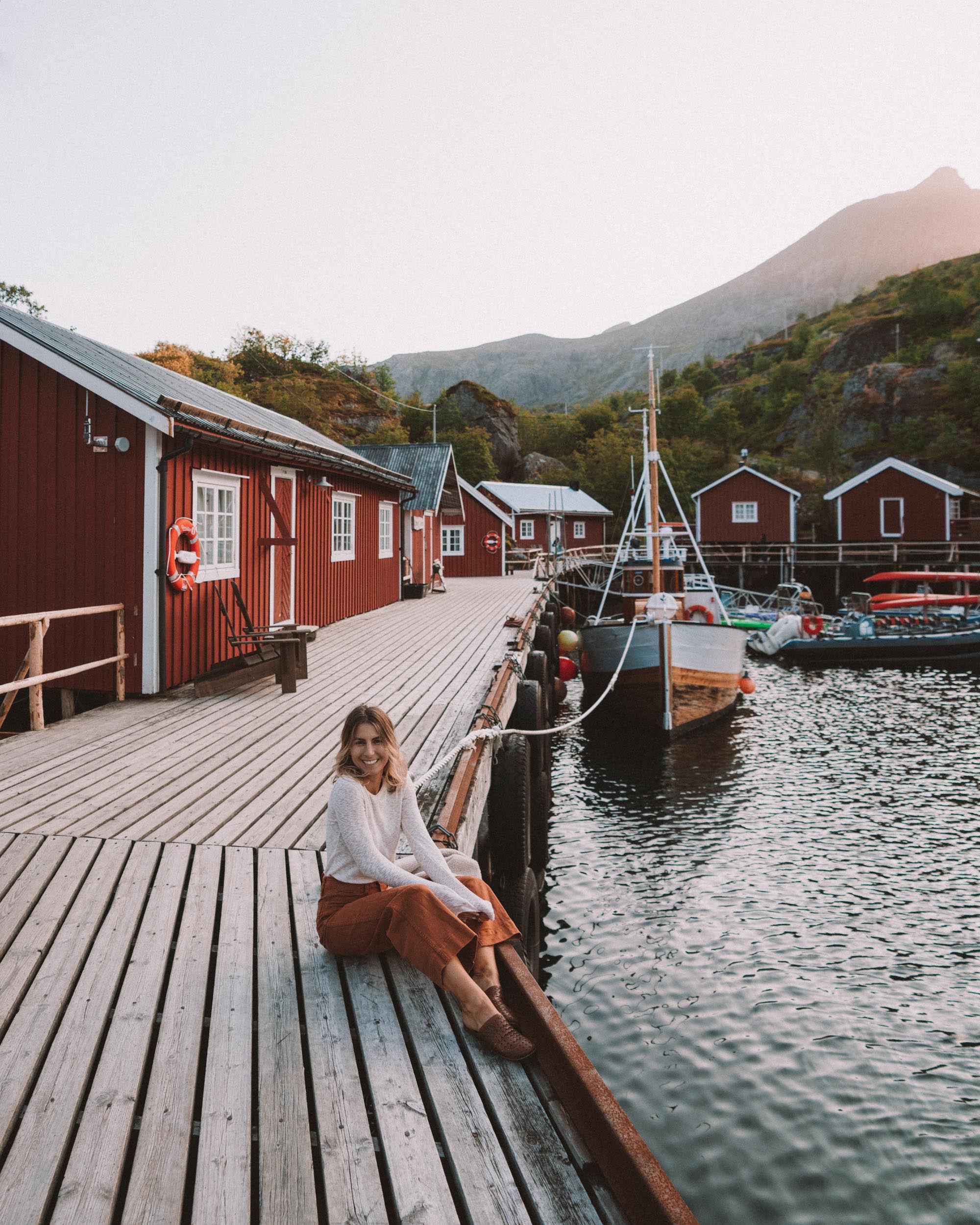 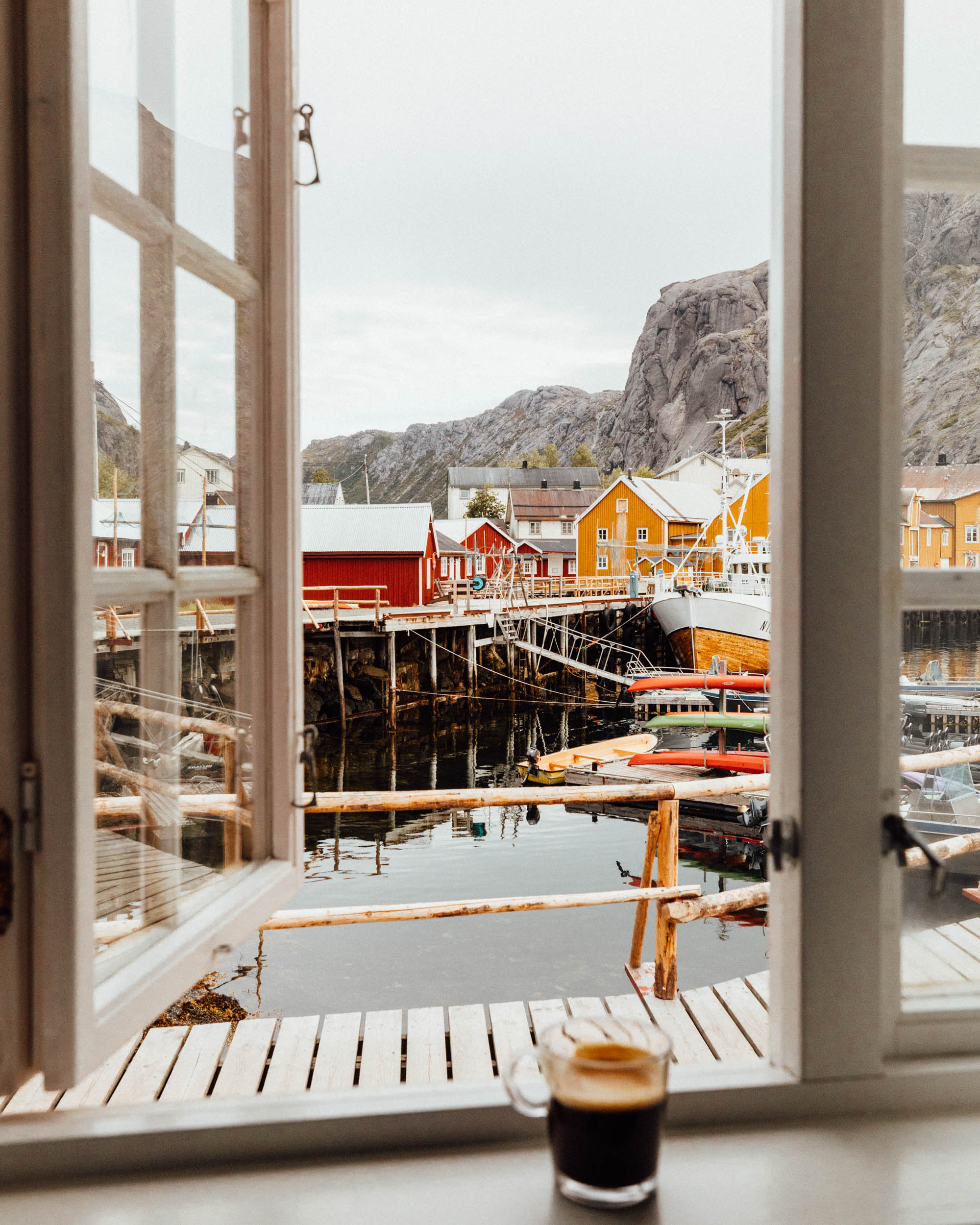 Here are the other hotels in Lofoten I considered while planning this trip:

New to Airbnb? Here’s our code for $40 off your first booking!

Towns To Visit in Lofoten

As most towns in Lofoten are small, it’s most common to road trip and visit a few each day. We typically explored two to three towns in the morning and two in the afternoon, stopping to have lunch or dinner along the way.

There’s a couple ways to see Lofoten: either by choosing a home base that’s very central to the most picturesque towns, or by switching hotels every night or two as you make your way west or east. Since we preferred to have a more relaxed itinerary, we chose to stay in the same hotel for the duration of our trip.

Here’s a breakdown of towns in Lofoten, starting with the westernmost town of Å.

Å is quite literally at the end of the road. This town is one of the most photographed in Lofoten. It’s easily walkable and has a few cafes, a museum, and a boat dock.
Highlights: Walk down the dock to the end for a full view of the town or sit outside and have coffee in between the cozy houses. 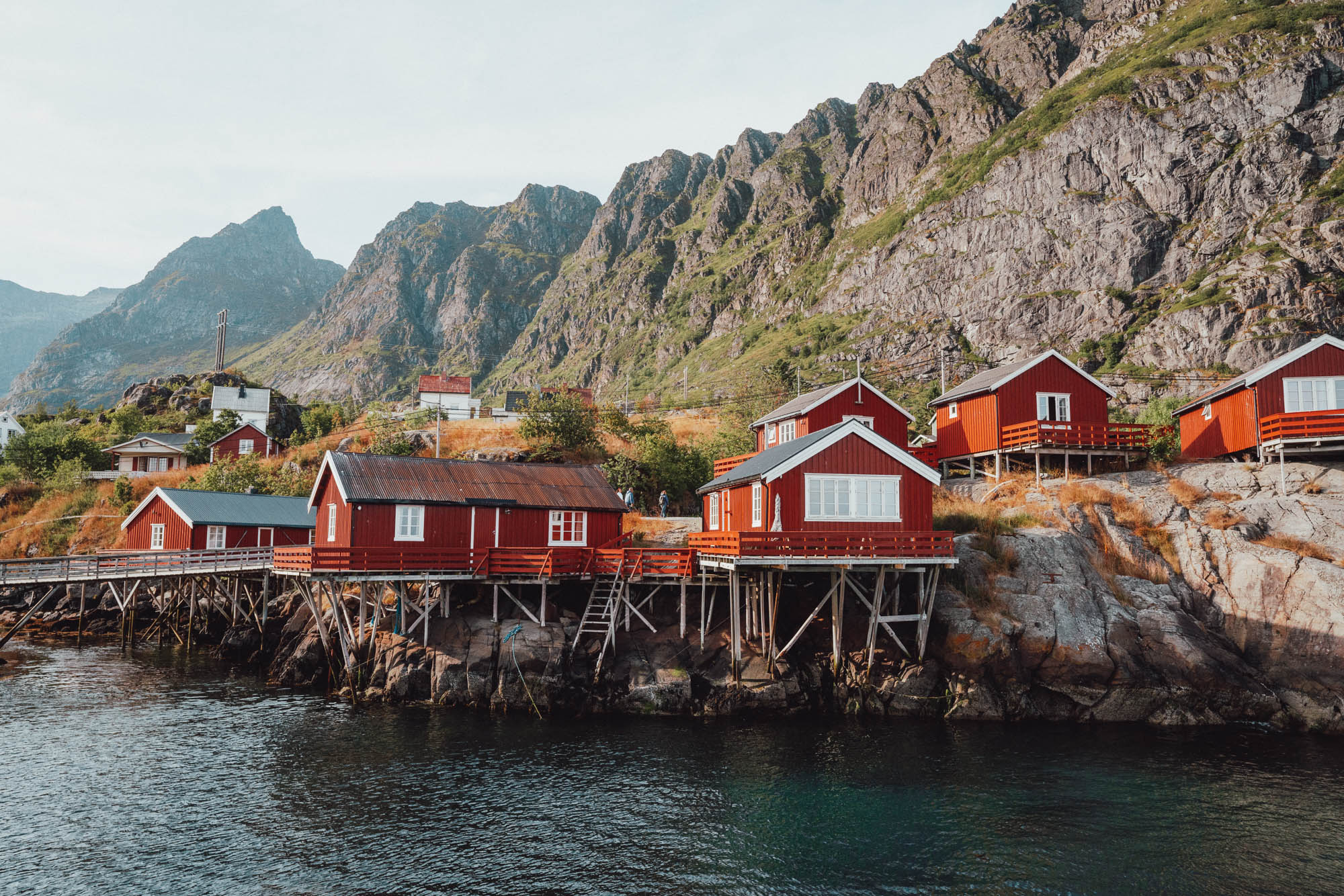 Sørvågen is home to plenty of Lofoten’s classic ‘rorbuers’ (fishermen’s cabins), some of which date back to the 18th century. We drove through this town and kept an eye out for lookouts over the water.
Highlights: Maren Anna Restaurant is a local favorite for lunch or dinner. 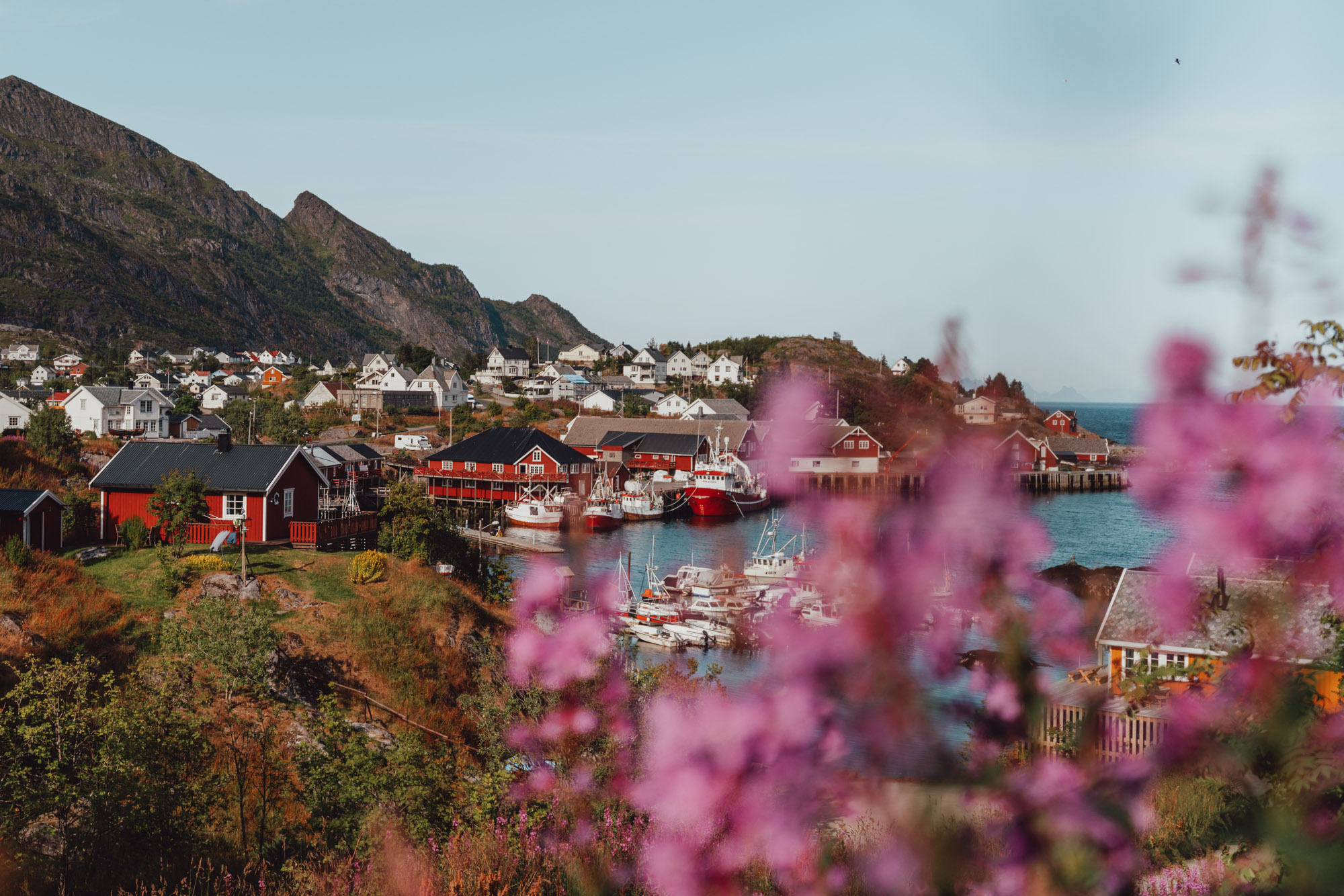 This is the most famous hike in Lofoten. The trail was recently re-done and now is made up mostly of stairs (and there are a lot of them!). Set at least 3 hours aside for Reinebringen, including the ascent, taking in the view at the top, and walking back down. Also, bring your camera and a warm jacket.
Highlights: the view from the top! We rewarded ourselves after the hike with reservations at a cozy restaurant in the nearby town of Reine. 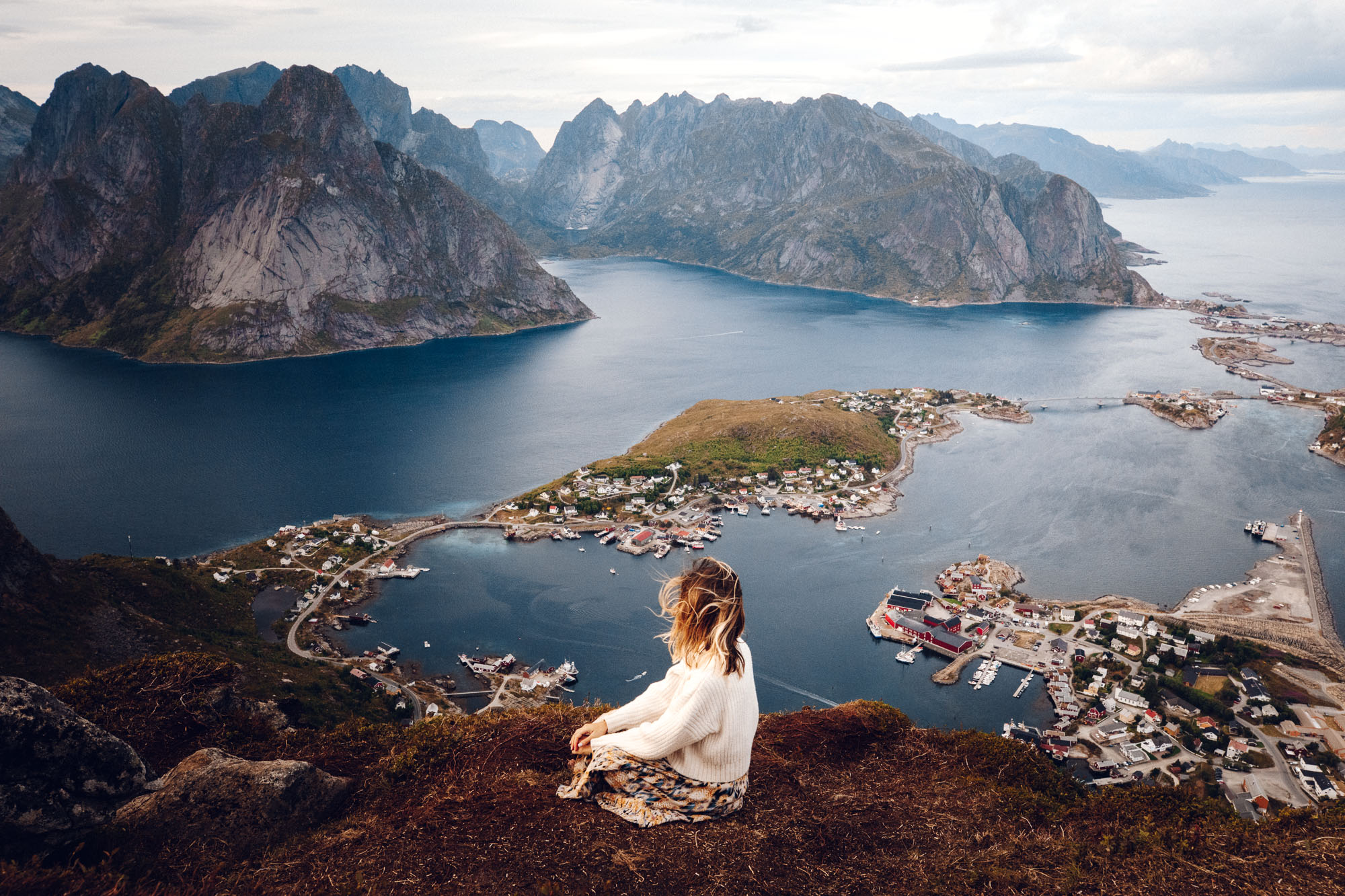 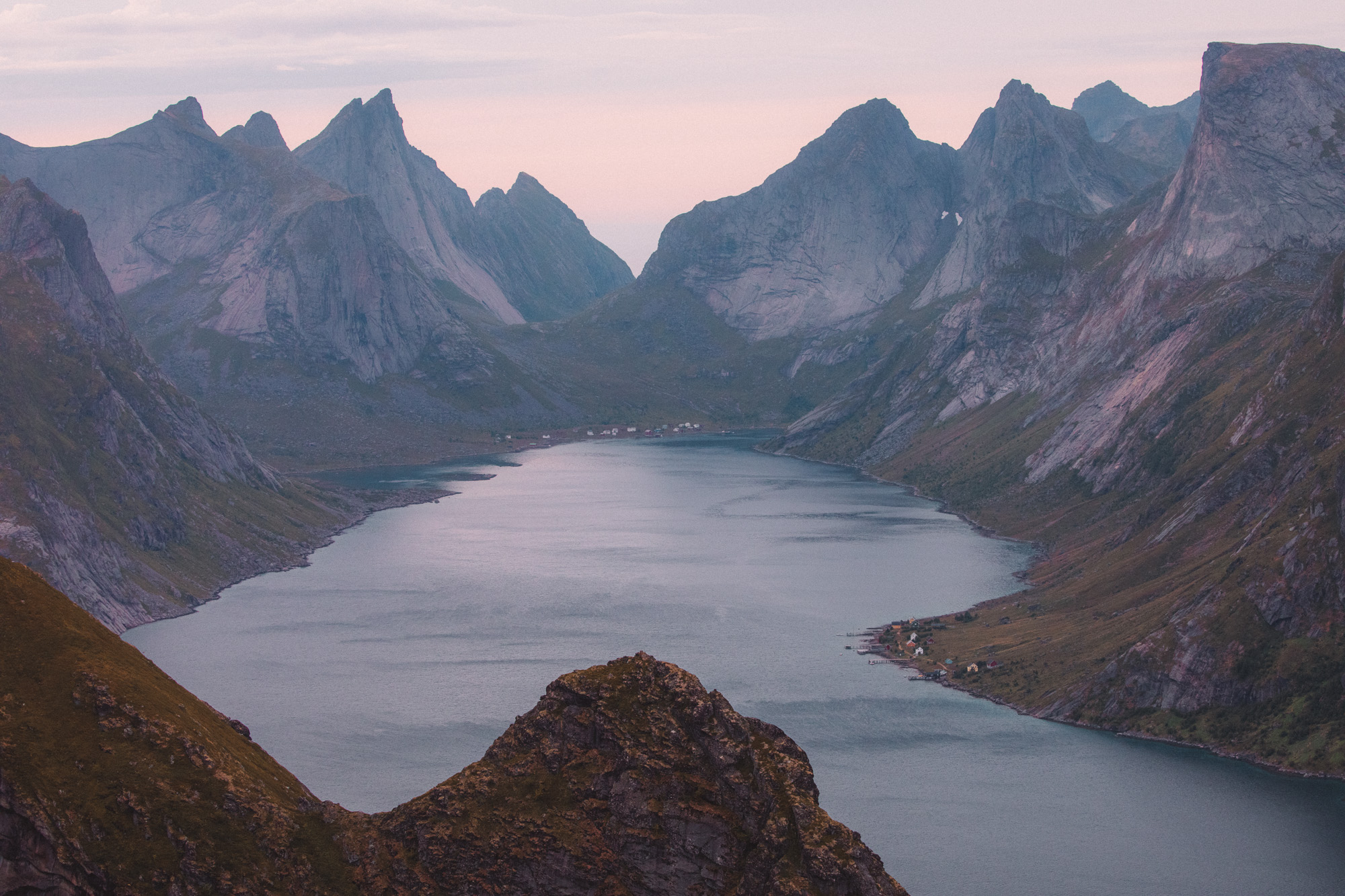 Reine is another famous town that is often shown in photos of Lofoten. A great stop along a road trip, Reine’s town center has ample parking so it’s easy to leave your car and explore the restaurants and shops along the water.
Highlights: we loved the walking bridge in front of the nearby mountain, pictured below (‘Walking Bridge Near Reine’ on this map). Gammelbua Restaurant is great for a romantic dinner. 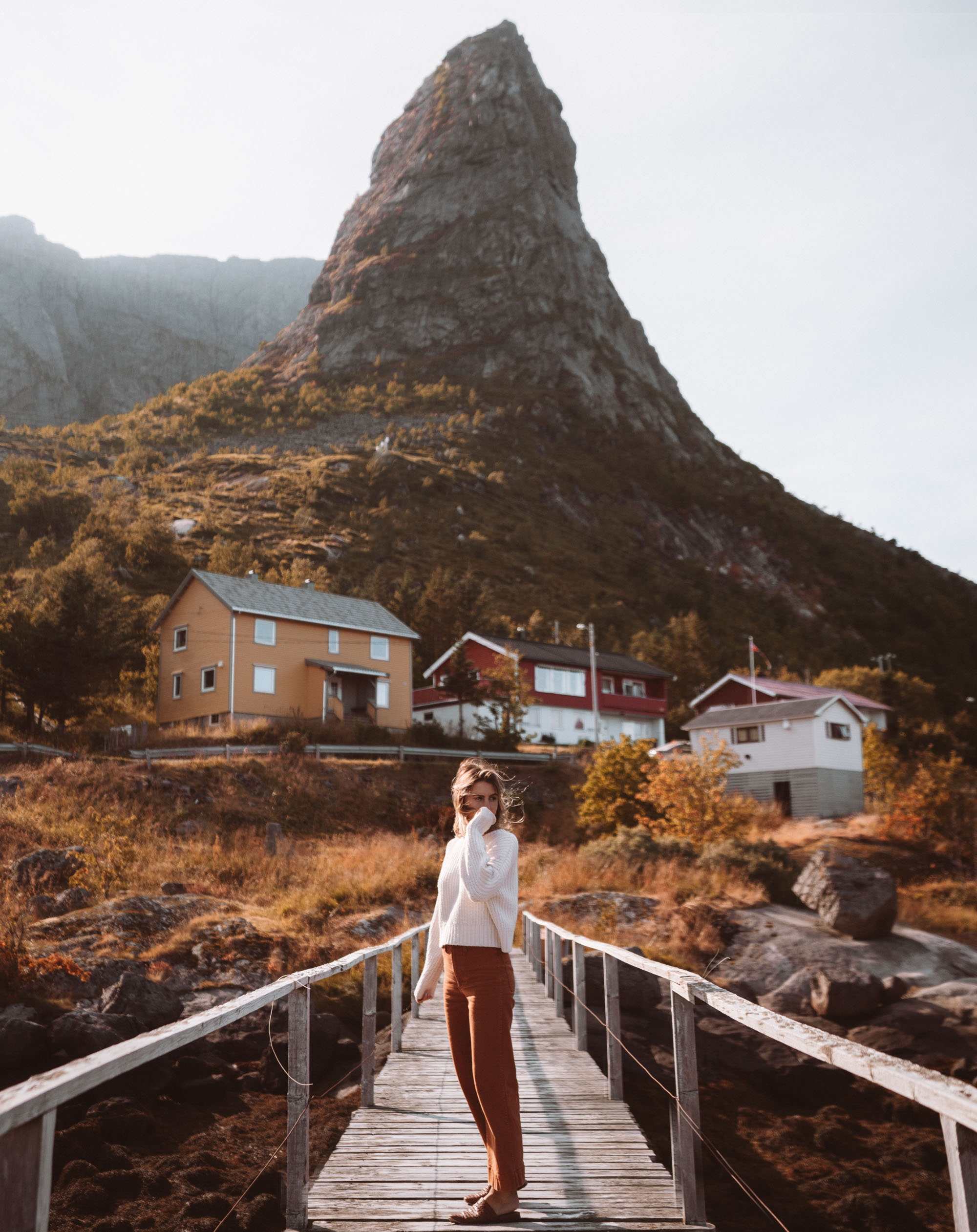 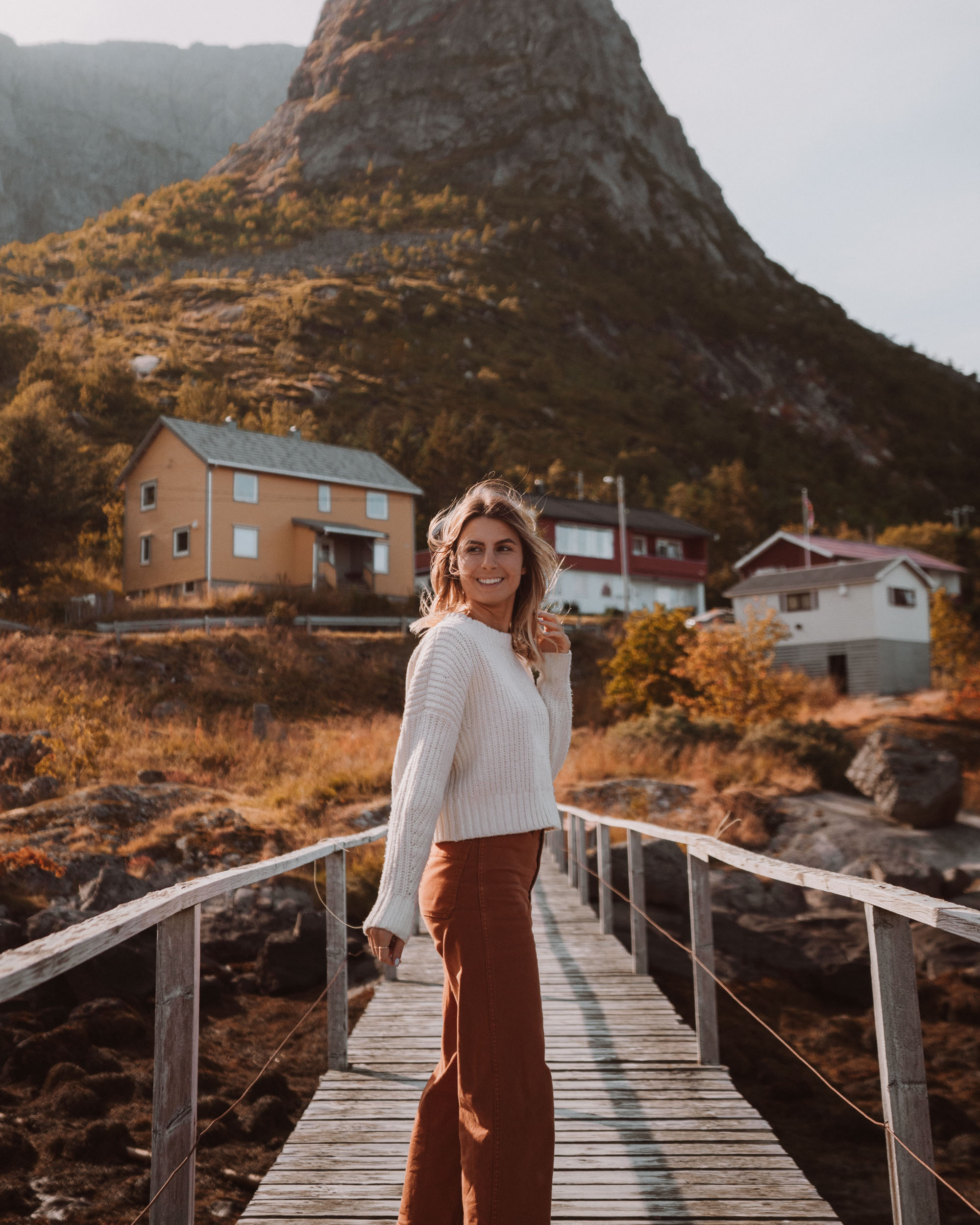 I found this to be one of the most picturesque towns of our drive. The view from the bridge of the yellow houses juxtaposed against the mountain is stunning! You can rent kayaks nearby to explore the islands, and it’s also a short walk from this town to arguably the most famous photo spot in Lofoten: Hamnøy.
Highlights: Anita’s Sjomat is a frequented lunch spot offering fresh seafood on the water. 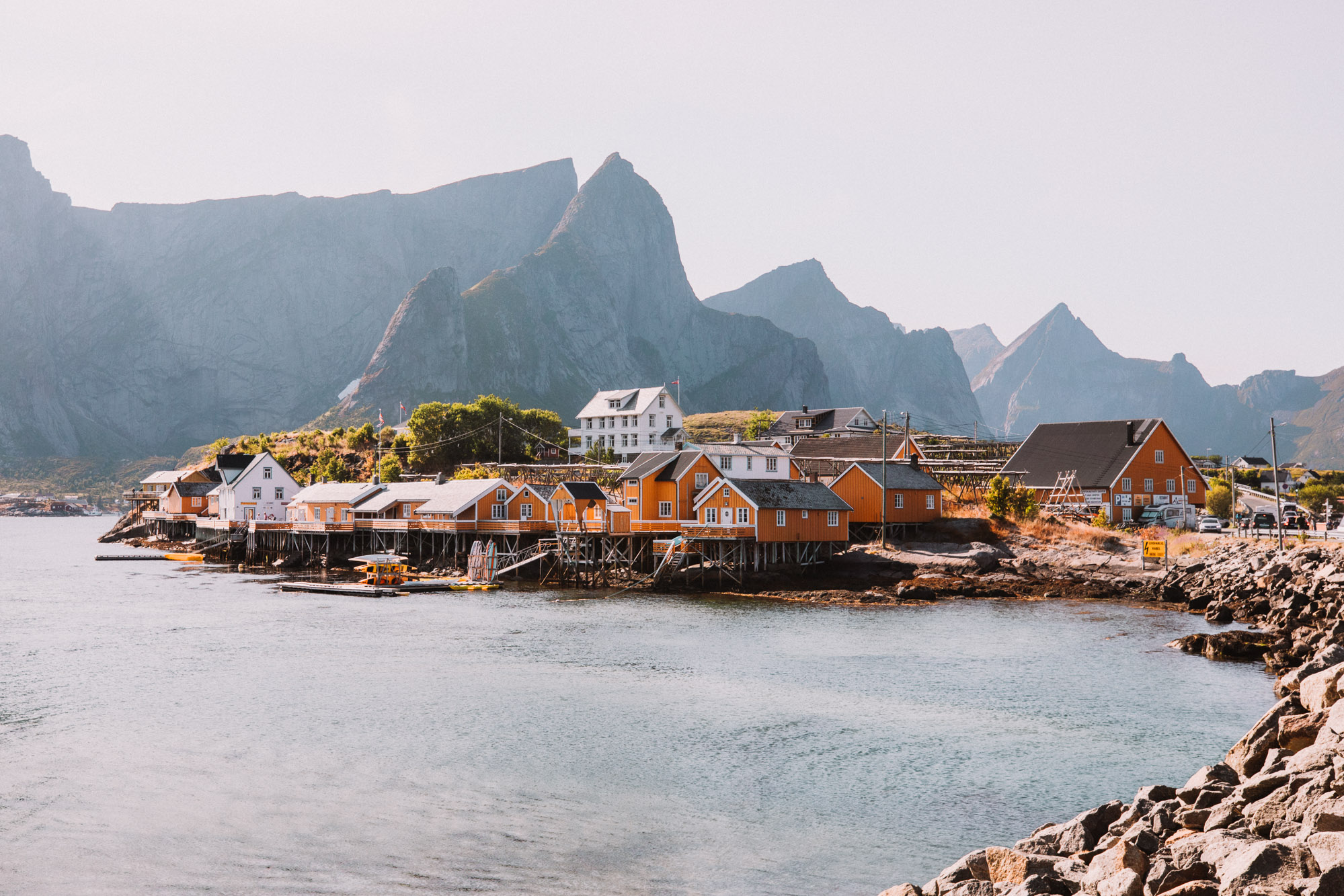 This quintessential Lofoten town is a must-see. The photo below is taken from the bridge en route to Sakrisøy, looking back at Hamnøy with Festhelltinden mountain behind. The red houses pictured are hotel Eliassen Rorbuer, a great option if you want to be close to some epic photo spots.
Highlights: the views of this small town are incredibly picturesque; it’s best to experience it by parking and walking around. 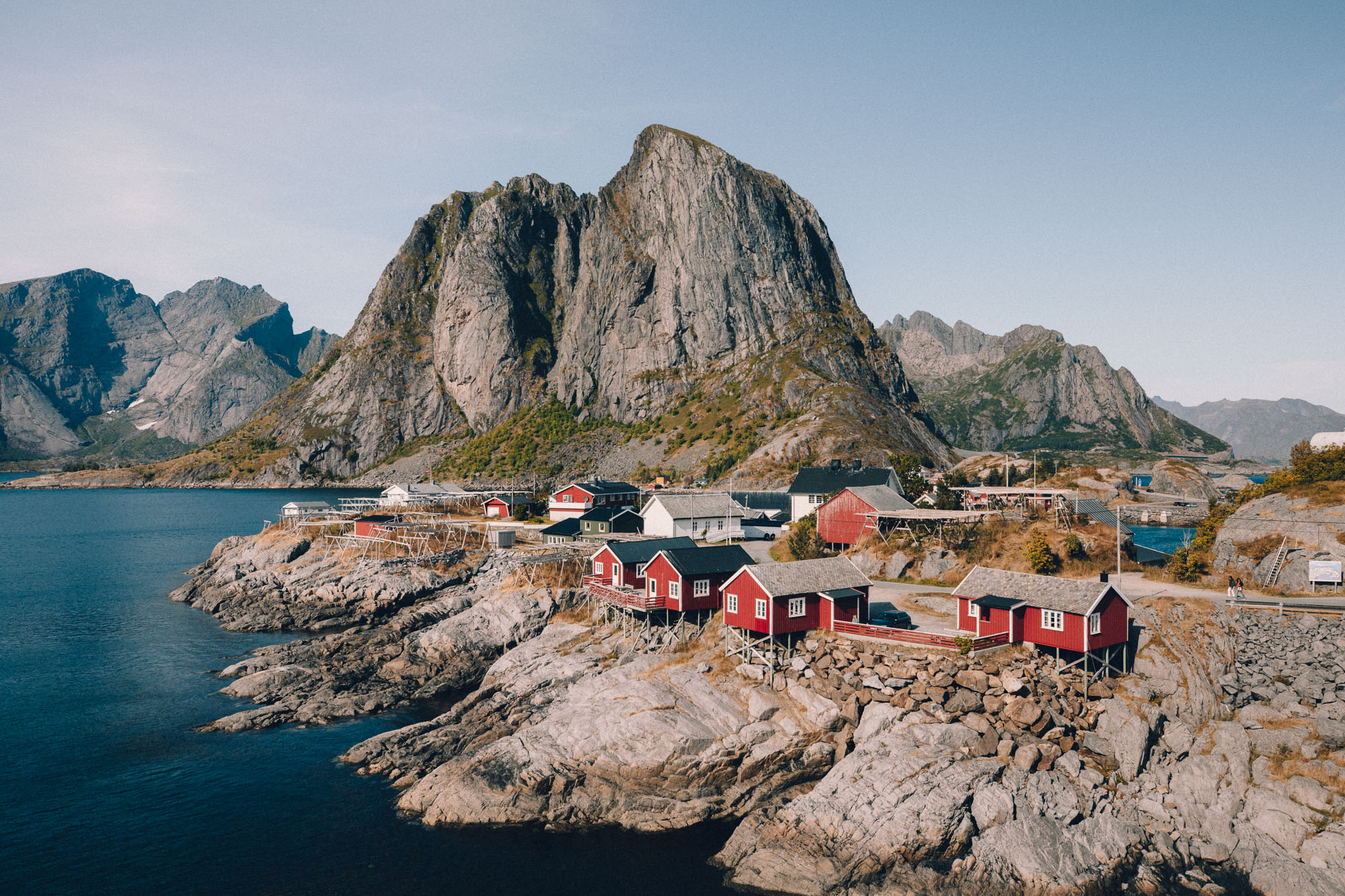 Fredvang is not exactly a town, but it’s a destination for the road itself. It’s often been photographed from above, as the highway connects small islands and looks completely surreal. There are also a number of trailheads nearby.
Highlights: driving over this picturesque road, below. We found this area to be relatively quiet and free from tourists. 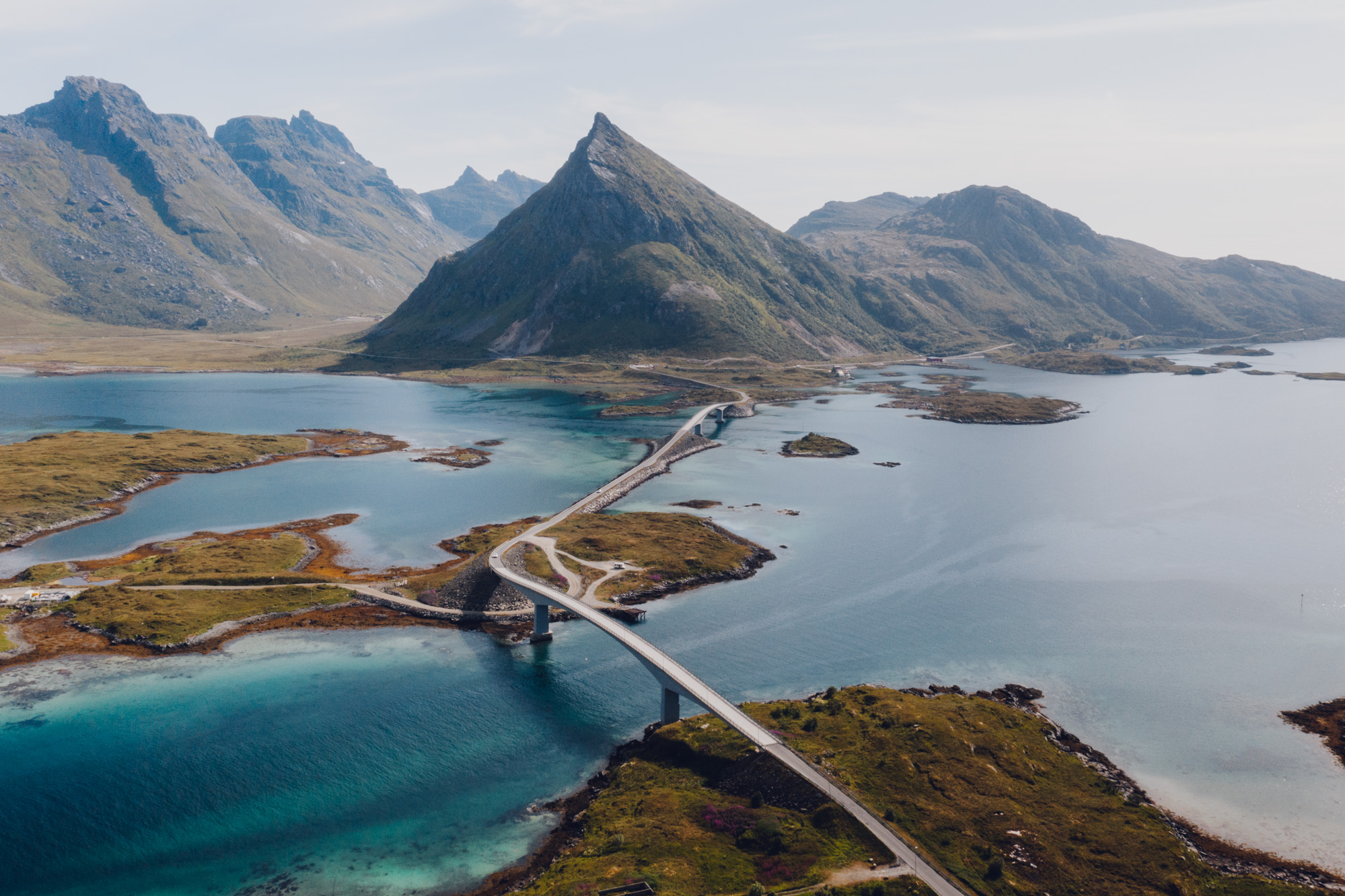 Nusfjord is the only town that charges an entrance fee, though it’s free if you’re staying at Nusfjord Arctic Resort. Nusfjord was perhaps my favorite town for this reason; it was always quiet in the mornings and evenings, and the views and perfectly preserved fishing cabins seemed to be incredible from every angle. There’s a local bakery and a casual lunch spot next to the hotel where you can order and sit outside overlooking the water and fjords. You can also rent boats or book fishing trips from the dock. More photos from our stay in Nusfjord.
Highlights: the drive into Nusfjord is absolutely incredible (‘Mountains En Route to Nusfjord’ in our map). We also loved Restaurant Karoline. 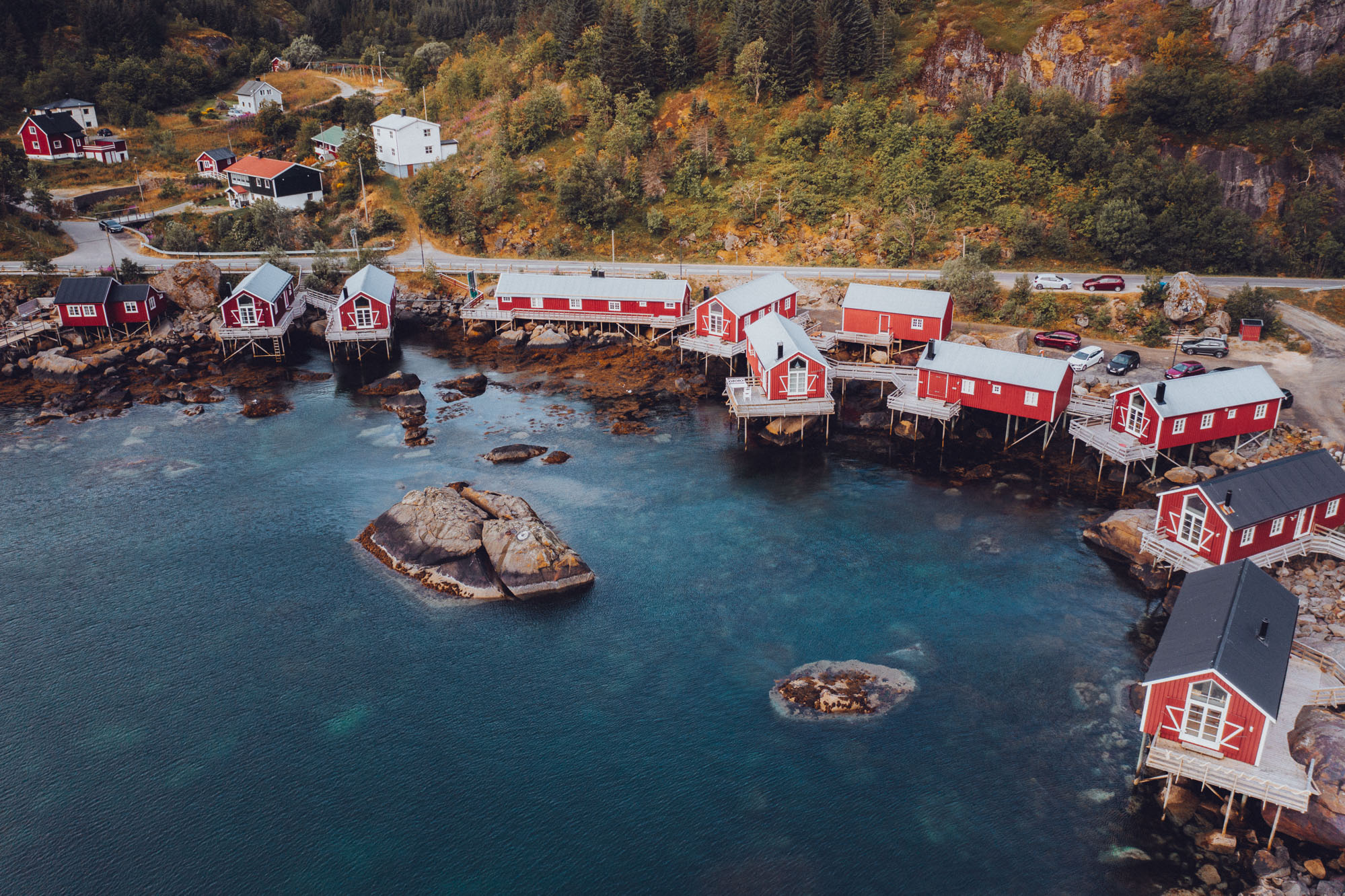 Ballstad is Lofoten’s largest traditional fishing village, a picturesque town offering lots of nearby activities and hikes in the mountains. It’s easily accessible from Leknes Airport, so Hattvika Lodge is a popular hotel choice here.
Highlights: we had a delicious dinner (and dessert!) at Himmel og Havn restaurant, pictured below. 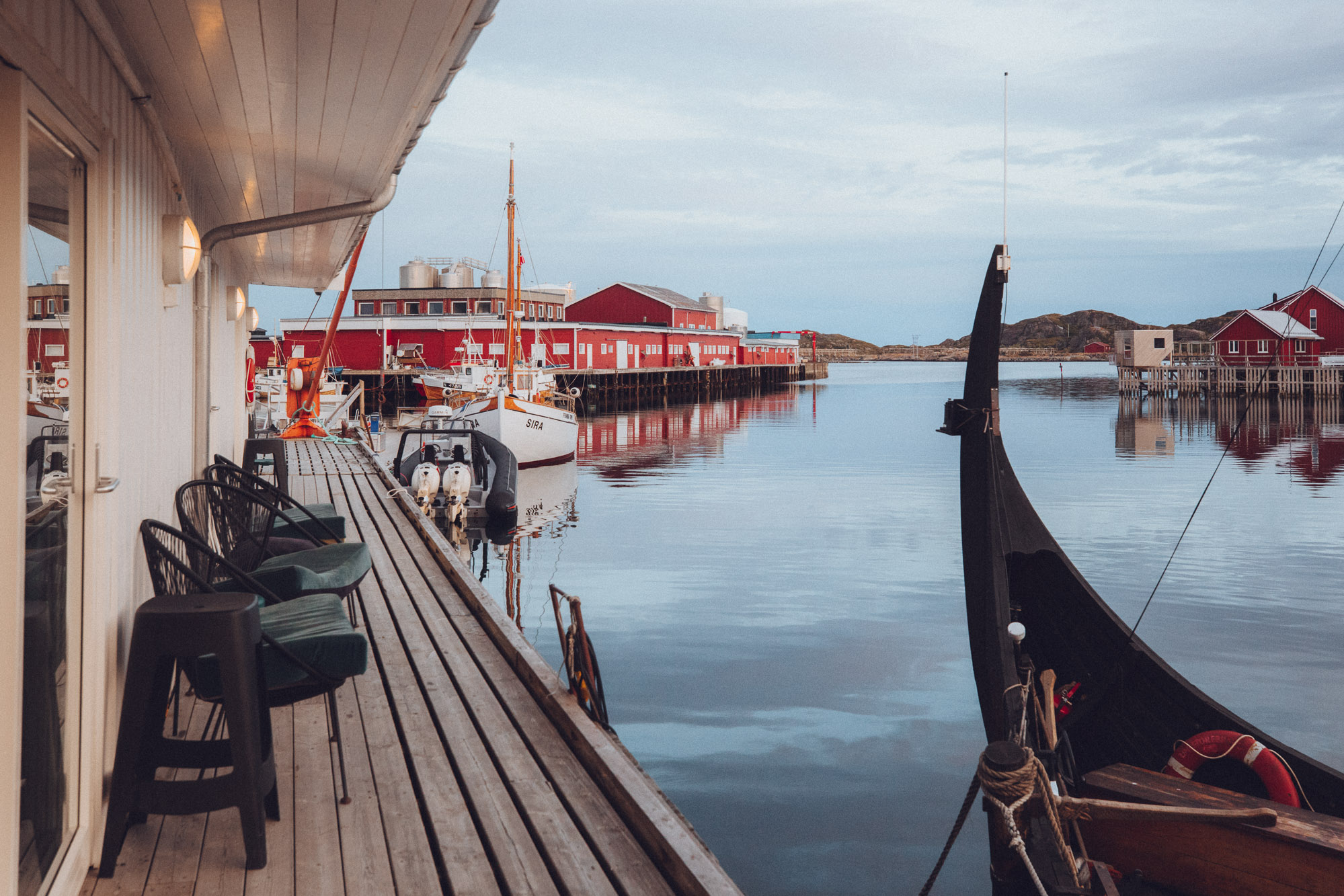 Haukland Beach and Unstad Beach are located in northern Lofoten, and you can easily hit both of them in one afternoon. Unstad Beach is known for having the world’s northernmost surf school – and yes, you can take surf lessons here! Haukland Beach is spectacular, with a long stretch of white sand and picturesque mountains. The photo below is of Unstad Beach, which has a small parking lot (it’s an honor system for paid parking).
Highlights: The accommodations at Unstad Arctic Surf all have barrel saunas, if you’re after something unique. 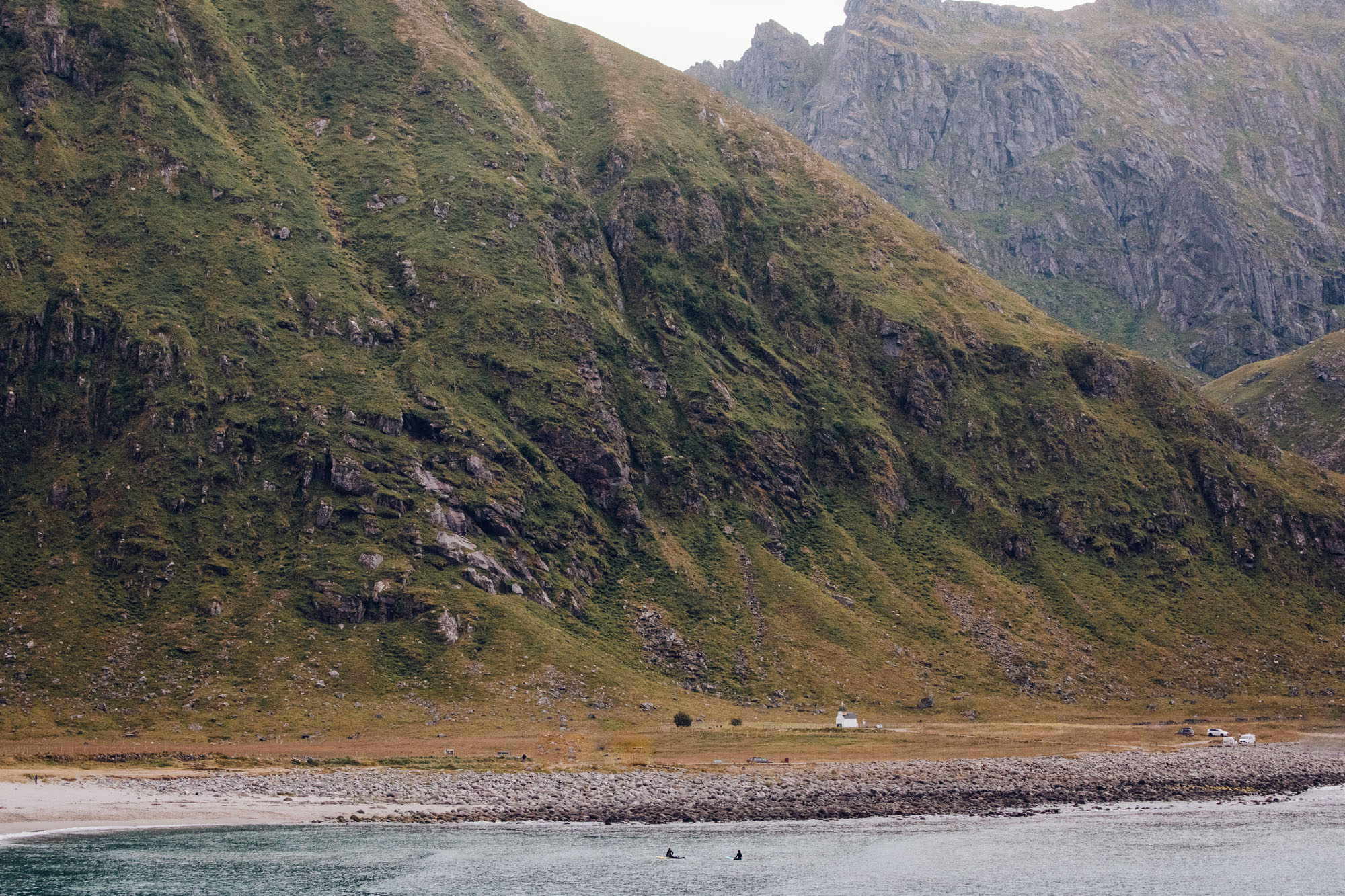 Henningsvær is a bit larger than Lofoten’s other towns, with a series of shops, galleries, and restaurants. Here, you can walk across a bridge connecting the two islands and visit the old town center, as well as the soccer field pictured below (maybe one of the most picturesque ones in the world). Since it offers a bit more to do, we found Henningsvær to be more crowded than other towns.
Highlights: The view from above is spectacular, as well as the drive to Henningsvær. 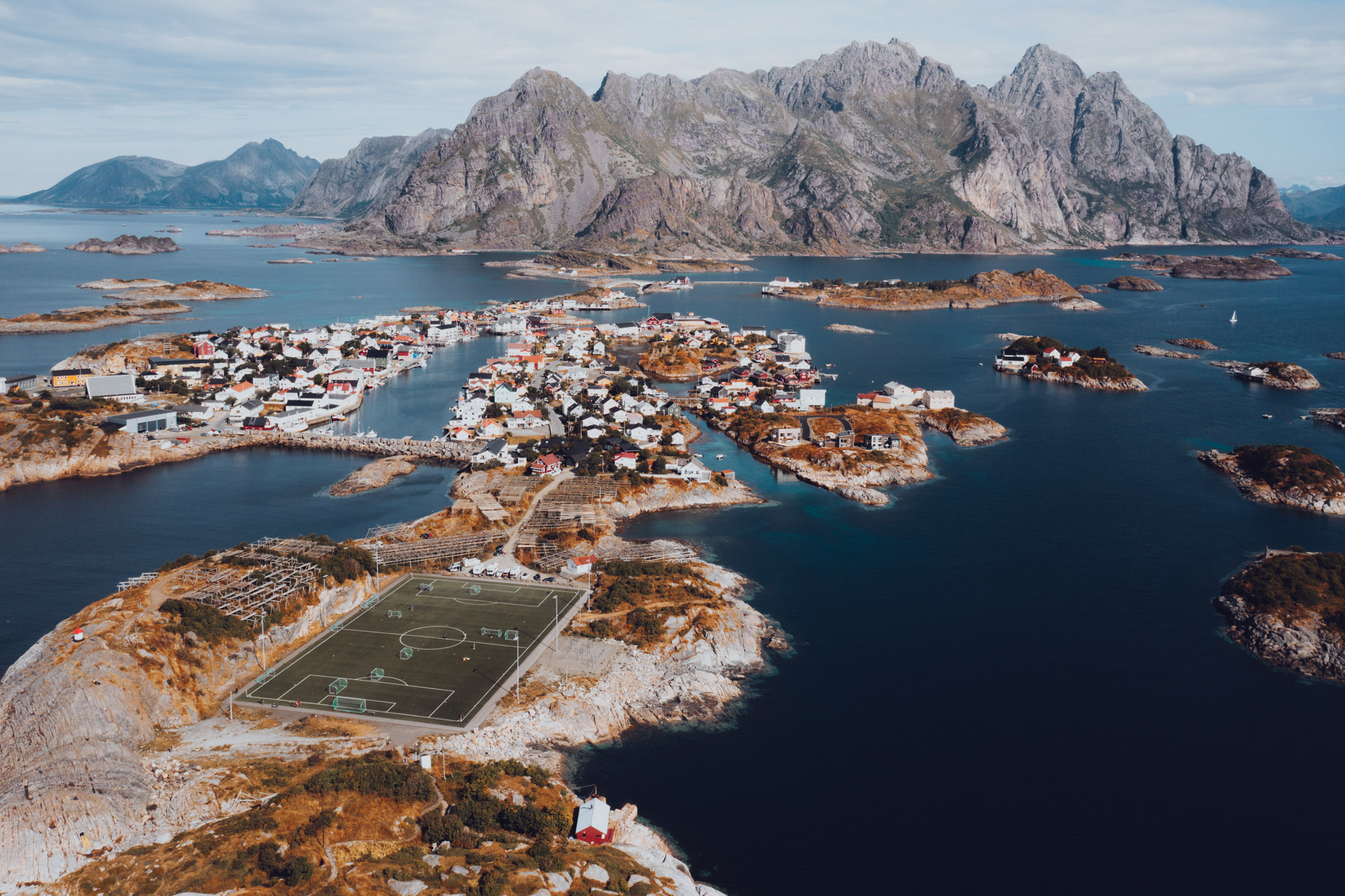 Not pictured: Leknes, which serves Leknes Airport and is a larger inland town with a shopping mall, restaurants, and other facilities. Svolvær is also another large town that we skipped during our trip.

There are two options for flying into Lofoten, both of which connect through Oslo Airport: the first is to fly into Leknes Airport. Leknes Airport approximately a half hour drive from Nusfjord, where we stayed. The other option is to fly into Harstad/Narvik Airport, which is located inland in the east of Lofoten, approximately four hours from Nusfjord. Note that Nusfjord isn’t a ‘final’ destination, but it’s where we stayed and happens to be the most central to the destinations I mentioned above.

Alternatively, you could fly into Tromso Airport in the north and drive to Lofoten, approximately 8 hours. It’s typically cheaper to rent a car from Tromso (and car rentals in Norway can be expensive).

Half the fun is enjoying the scenery from your car, as Lofoten is definitely a road trip destination! 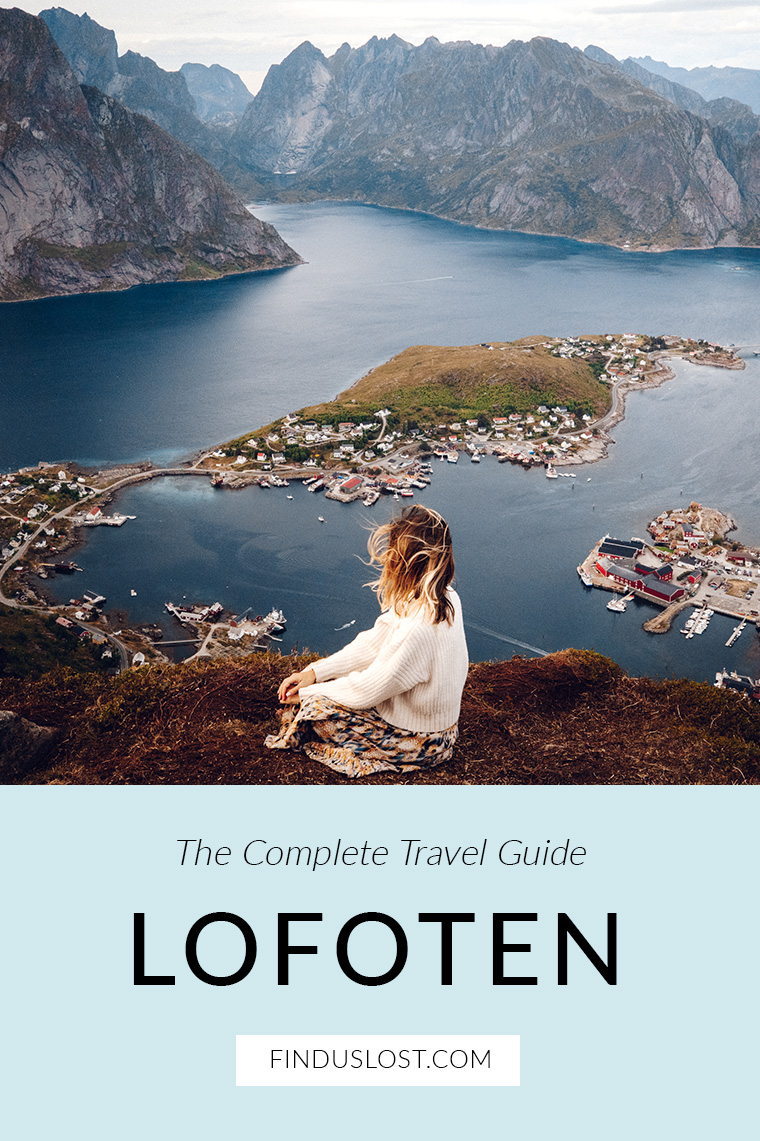 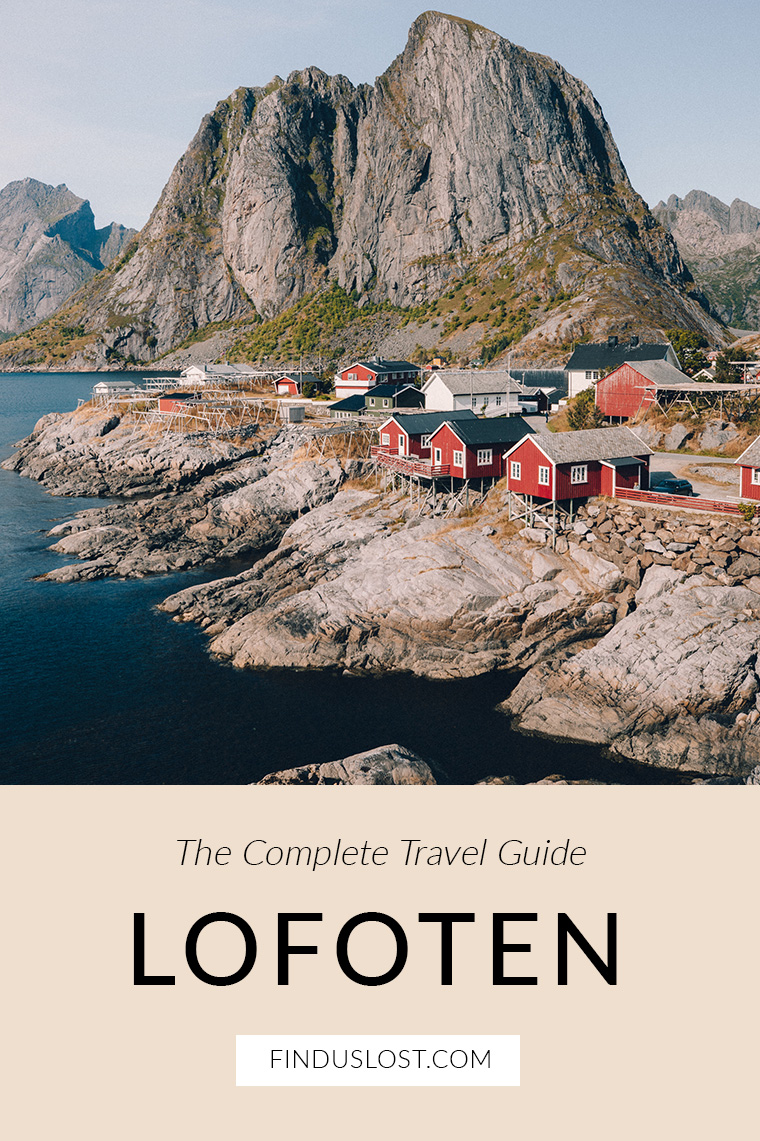 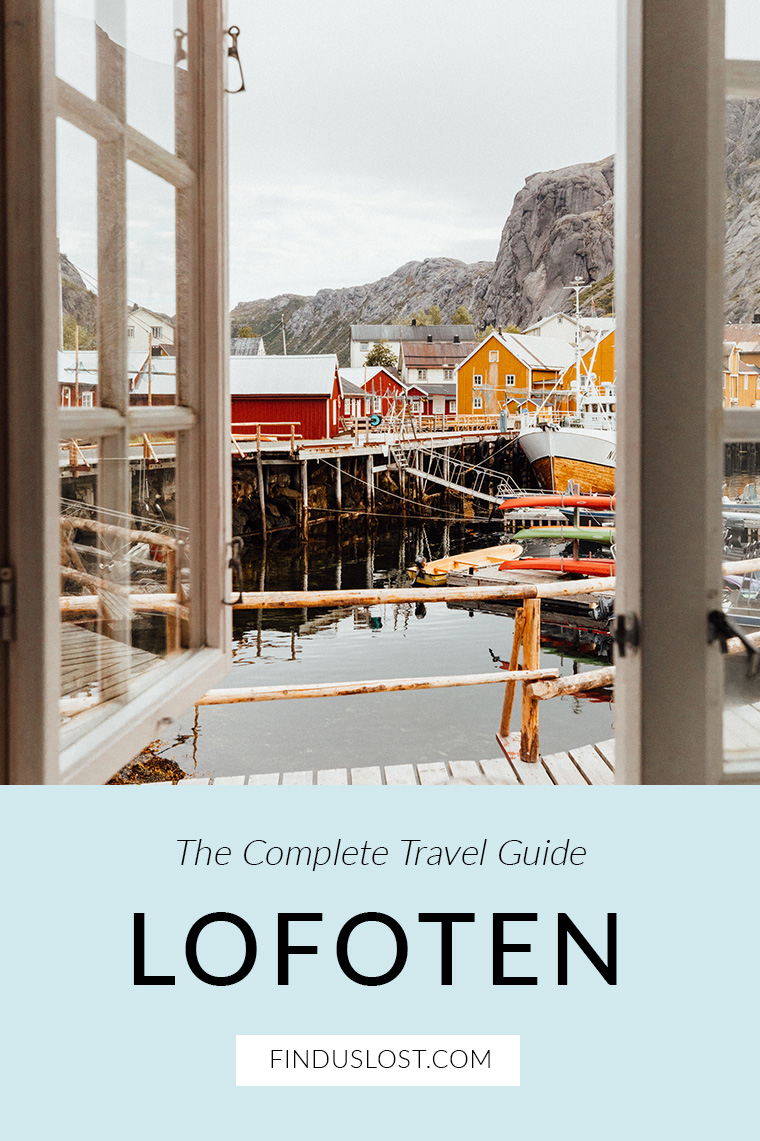 How We Organize Travel Photos

A Weekend Guide to Lisbon, Portugal