A Guide to Holi Festival in India 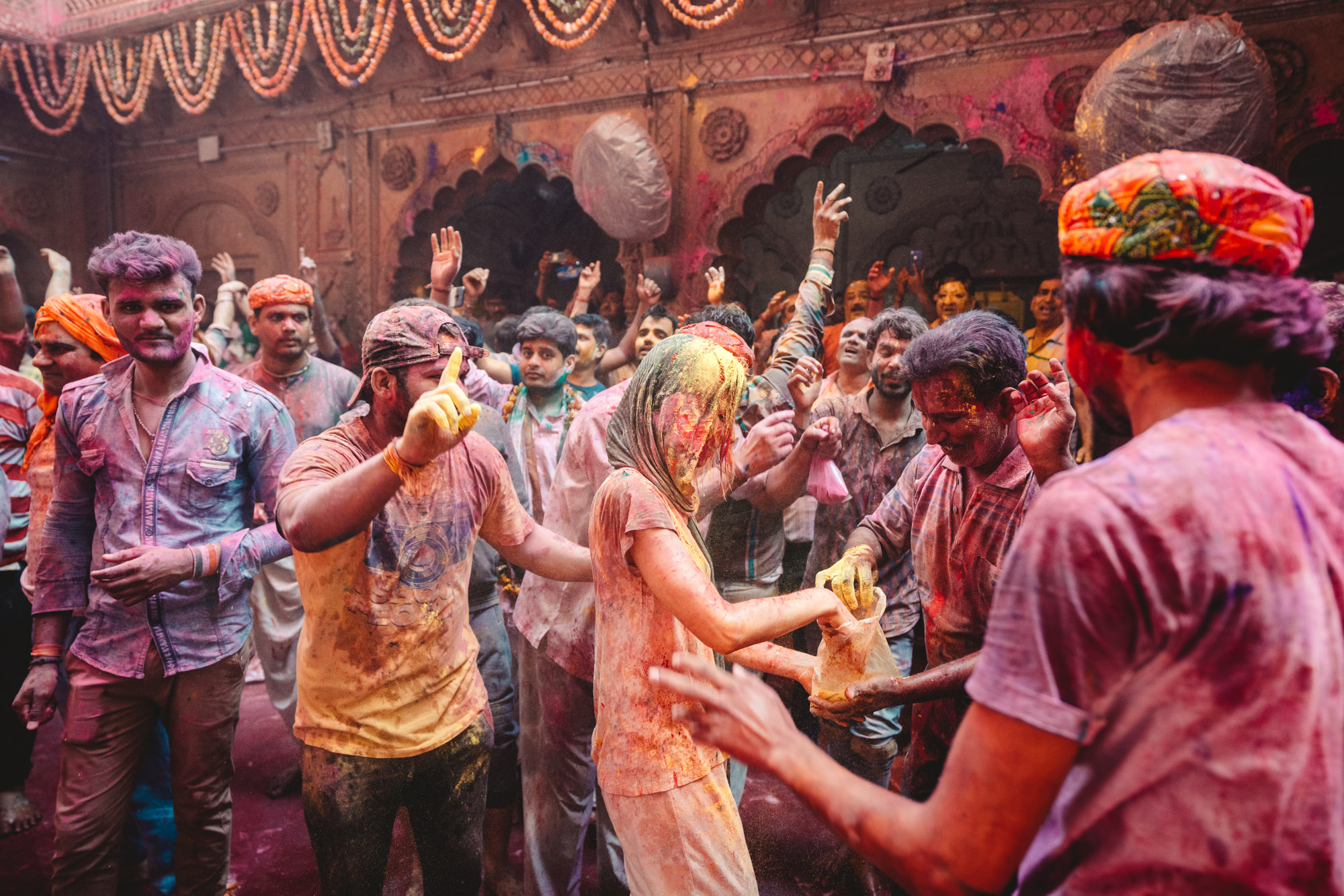 India has been at the top of our list forever. Last year Jacob was invited on a fairly last minute work trip that happened to fall over Holi Festival in India. I was a bit more apprehensive of going last minute as I knew it would be tough to navigate (I’m always the planner when it comes to our travels!). But the timing seemed too perfect to pass up. A few weeks later we were boarding a plane to Delhi for a three-week trip to India.

Getting around – train, Uber, tuk tuk

While researching where Holi Festival in India is celebrated, I quickly settled on being in the sister cities of Mathura and Vrindavan. Locals ‘play Holi’ throughout the country and in almost all big cities like Goa and Mumbai. However, Mathura is the birthplace of Krishna (the Hindu God of Love) and together with Vrindavan they are holy cities, home to the most traditional Holi celebrations. Plus, they are not known to attract crowds of tourists — mainly locals.

The upside to experiencing Holi in a lesser-known tourist destination is the more authentic experience. The downside is the complete lack of information, facilities, and hotels that cater to visitors. I highly recommend hiring a guide to celebrate Holi in this region. Not only is it incredibly difficult to find out how to get to spots for the events, but many temples are not open to everyone. Our guide was able to speak Hindi to the locals and get us in to a number of temples we wouldn’t have been able to enter ourselves. One example of this is Flower Holi at Banke Bihari (one of the events that attracted me to this area in the first place!). 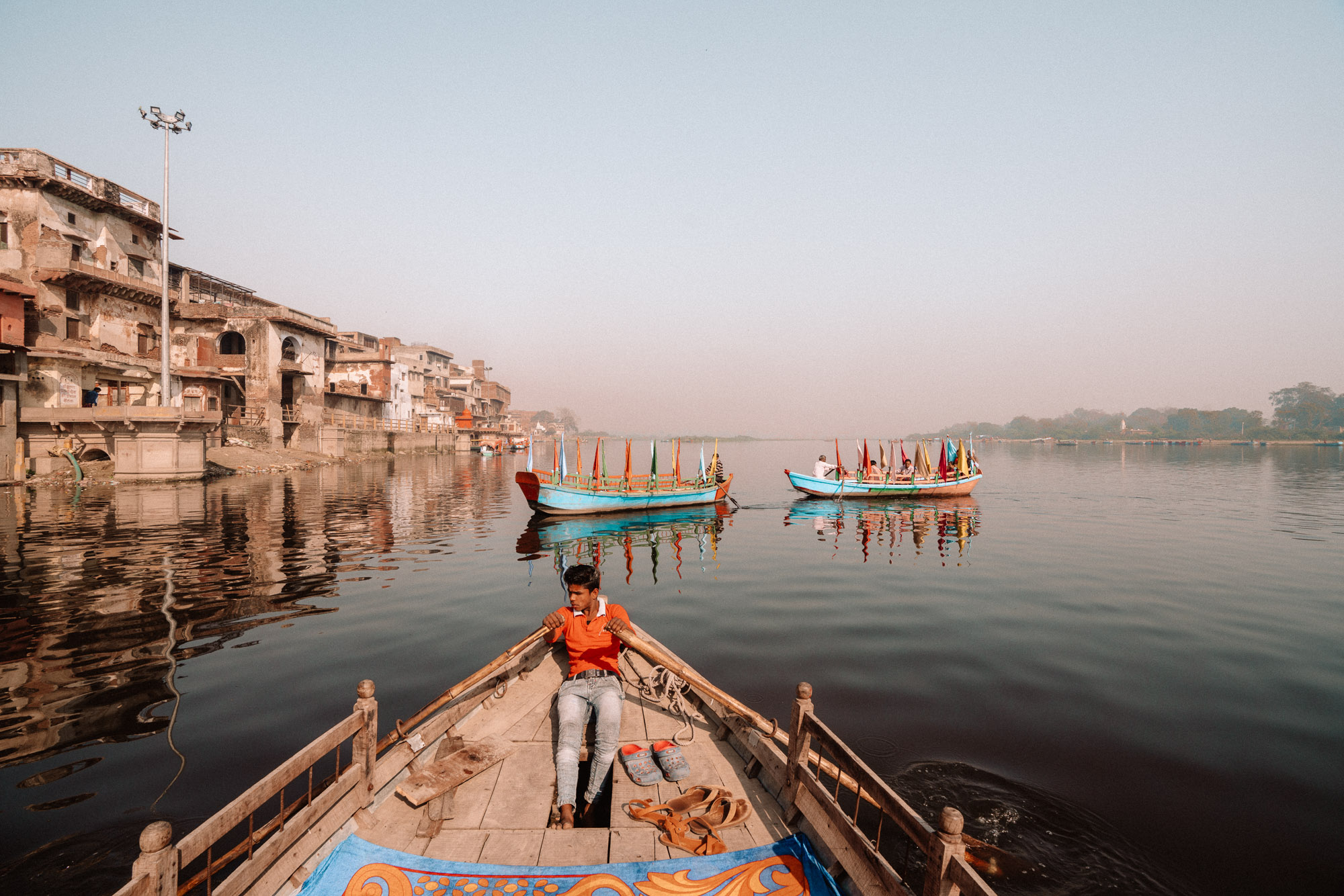 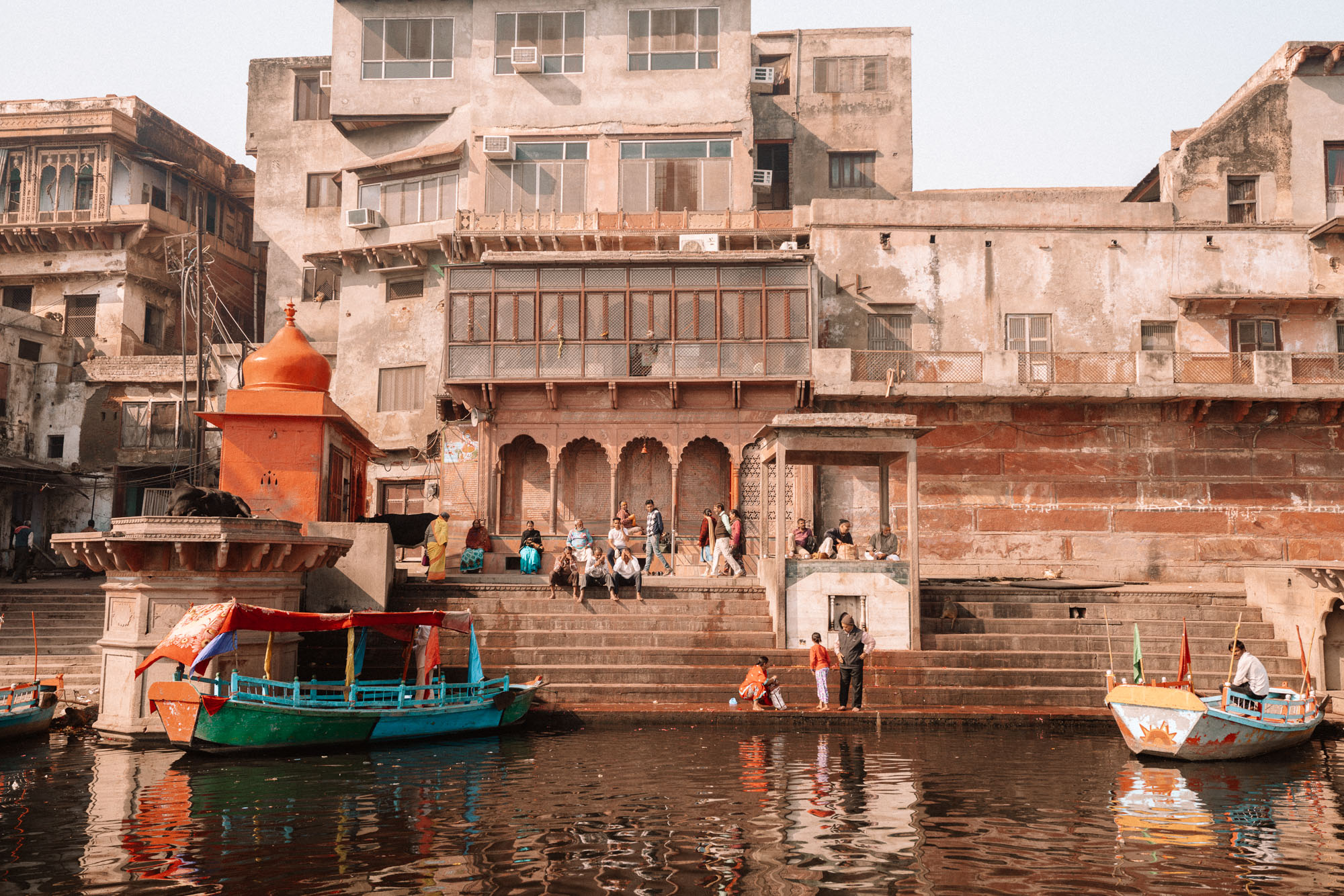 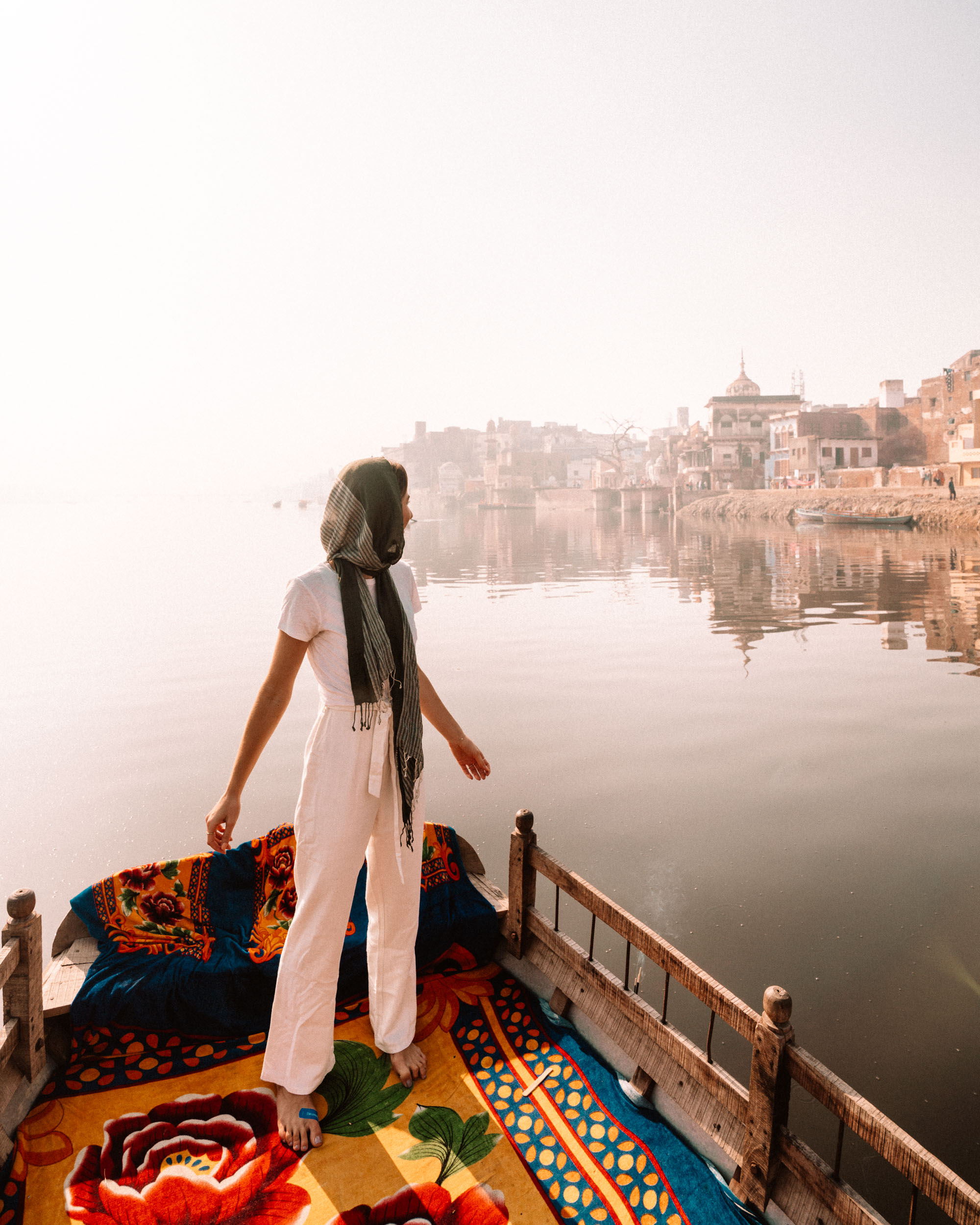 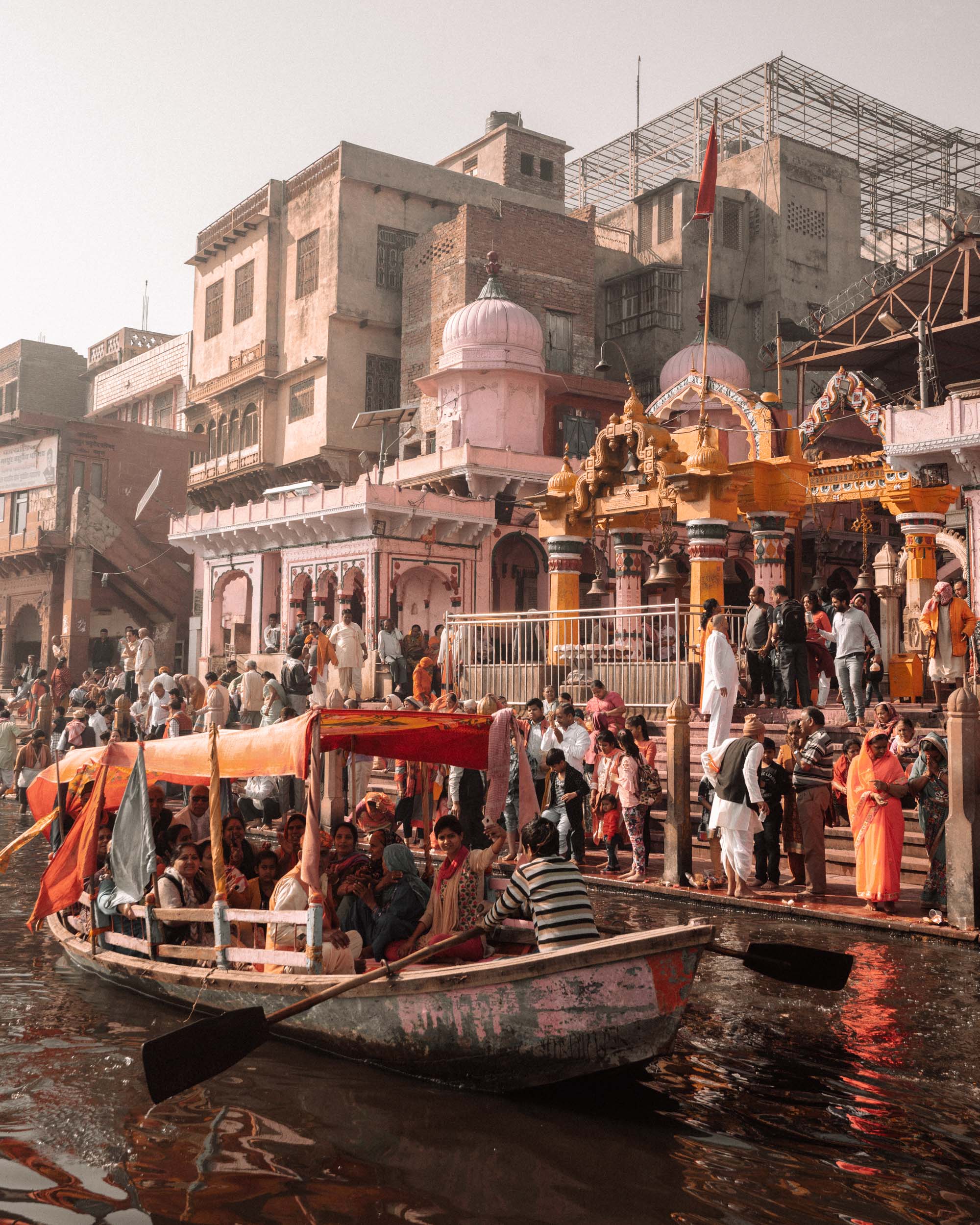 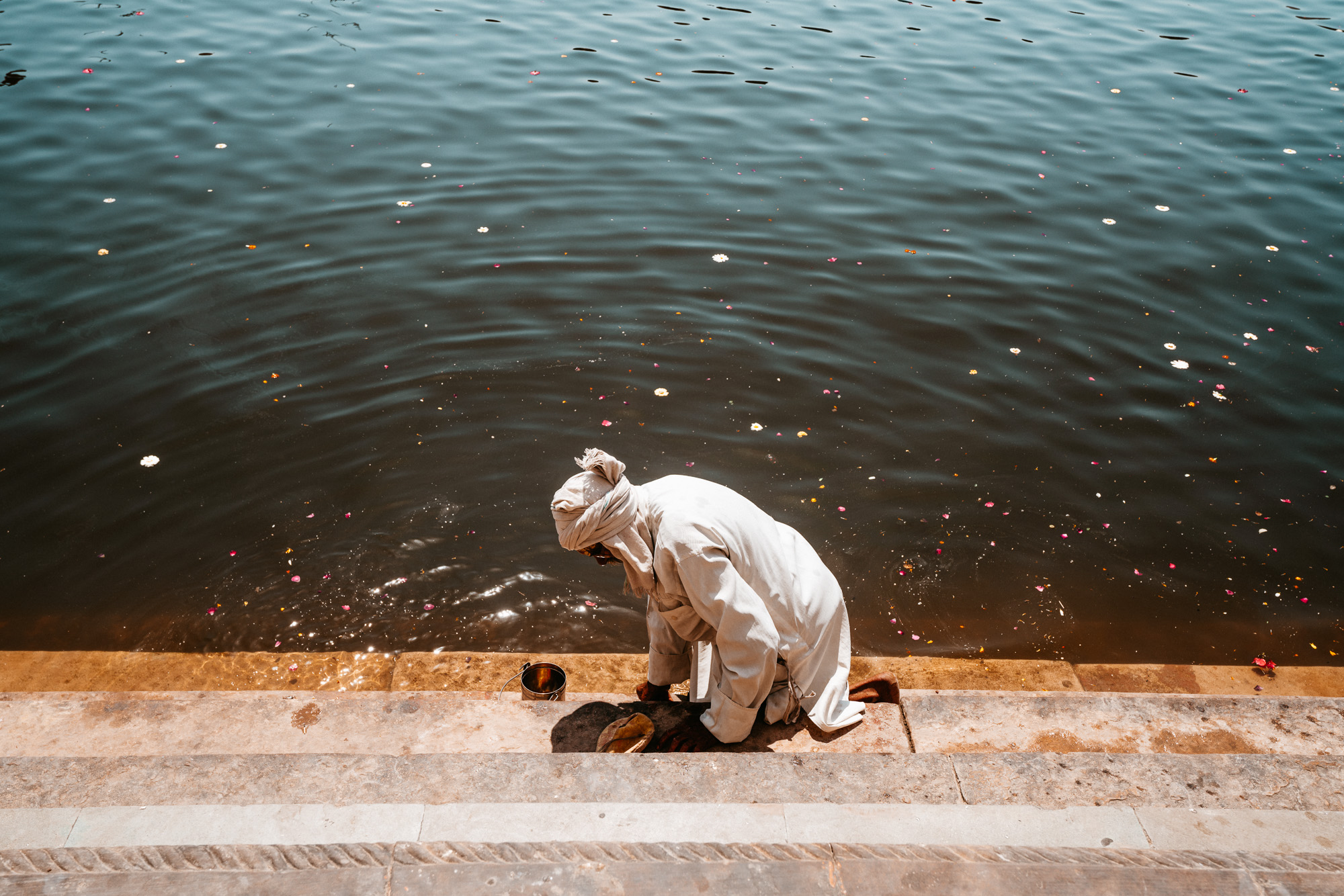 Photos left to right from top: playing Holi at Radha Vallabh Temple in Vrindavan; views of Mathura from our boat; on the Yamuna River; views of Mathura; a man cleaning the steps in Govardhan.

What to Know About Holi

This ever-changing schedule can make planning a trip around Holi festival in India a bit difficult. This site is one of the few I found that lists correct dates. In general, make sure you’re in India at least 5 days before the official Holi date in order to attend some of the local events. You’ll get plenty of opportunities to play Holi (i.e. throwing colors, experiencing events) before the ‘day of Holi’.

Looking for a guide in India? Drop us a message here.

What to wear – India is incredibly hot and humid. You’ll want breathable clothing, but you’ll also want to cover your shoulders and knees as per the local custom. Your outfit will pick up plenty of colors during Holi (and the colored powder won’t wash out!). I wore an all white jumpsuit and top to each event, and changed whenever I returned to my hotel. On the last day I had a bucket of water dumped on my head so I ended up leaving the clothes behind as they were drenched and impossible to pack! I’d recommend bringing at least two white outfits that can get ruined.

General Safety – Holi is definitely a high energy, rowdy event. Expect to have powder smeared on your face, water shot at you with toy guns, people hanging on to your shoulders in crowds, and plenty of surprises. I’ve received many questions about my comfort level as a woman during Holi. The thing to keep in mind here is that you will likely always be outnumbered by men whenever you’re in a crowd. There’s unfortunately always the possibility that someone will shove, grab or grope you. It happened to me a couple times, despite being next to Jacob and our male guide.

Because I went into Holi knowing this might happen, I prepared myself to not let my experience be tainted by the few men who take advantage in situations like these. I don’t tolerate it, but I also won’t let it keep me from attending. The vast majority of locals are respectful and kind. You’ll need to decide for yourself what you’re willing to put up with, and know when to remove yourself if an event is too rowdy.

Note that many streets and temples can get extremely crowded at Holi, to the point where it is difficult to move. If that’s not something you are comfortable with, I would consider celebrating Holi elsewhere or in a more protected environment.

Tip: if you want to avoid large and particularly rowdy crowds, attend events leading up to Holi (instead of the official Holi day) and go in the morning. We headed to Agra for the Taj Mahal on the official day of Holi. 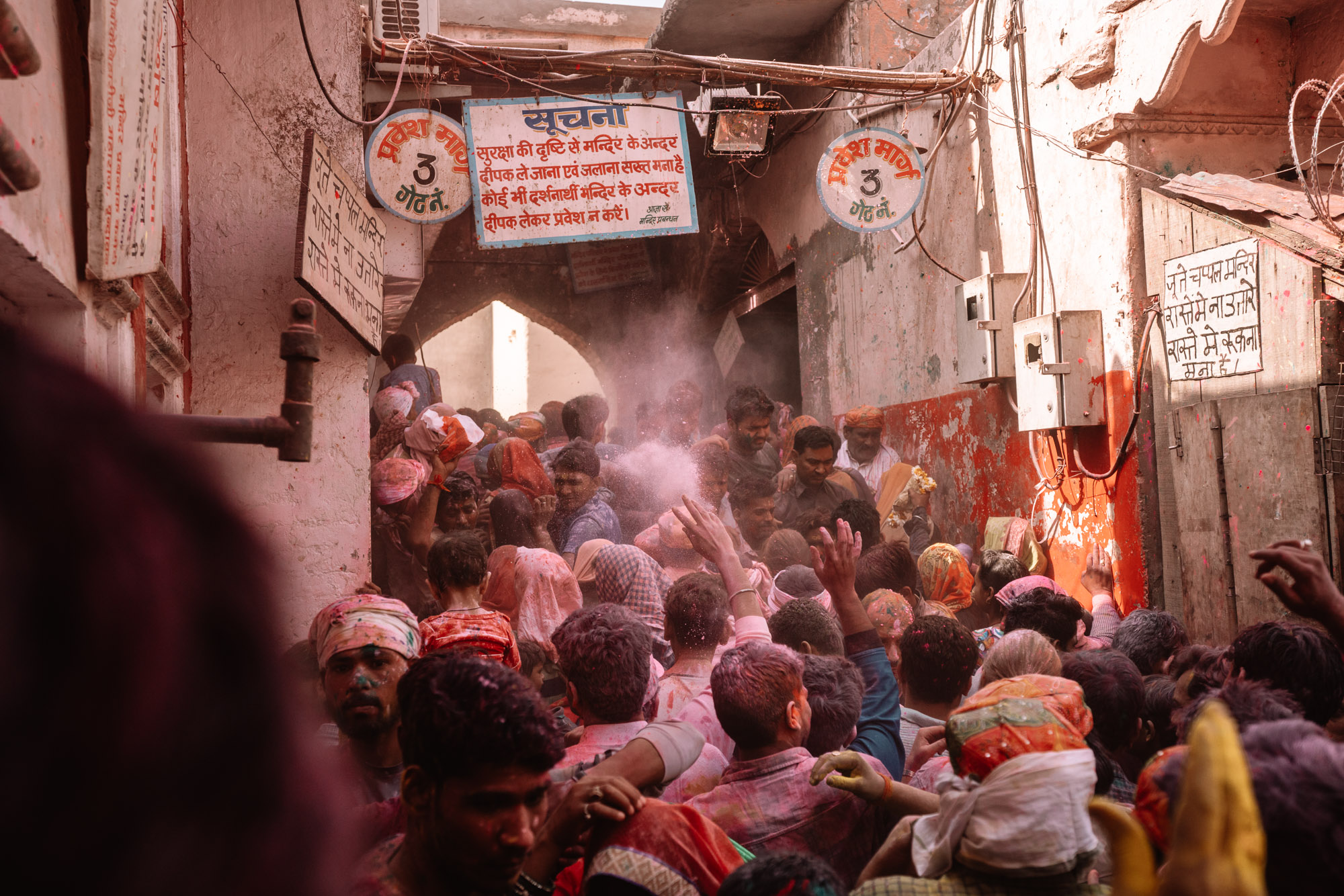 Holi is celebrated throughout the country, but the sister cities of Vrindavan and Mathura are home to the most traditional Holi festivities. You can also celebrate Holi in:

Though I tried to research Holi events in advance, it proved to be almost impossible to find out what events were happening in Vrindavan and Mathura, not to mention days, times, and locations. My best advice is to hire a guide as they will know where to take you and how to get there. The celebration I was most interested in seeing was Phoolon Wali Holi (Flower Holi), and we made it inside just in time only because our local guide spoke in Hindi with the locals to get us in!

Also keep in mind that though these celebrations seem to have specific dates, there’s almost always people playing Holi inside the major temples. This is even more true as the official day of Holi draws closer. You can’t walk out onto the streets without people throwing colors, so it’s impossible to miss if you’re in the Vrindavan and Mathura area during Holi. Here are some of the most famous Holi events and locations:

Location: Barsana and Nandgaon, near Mathura

Women beat men with sticks at Lathmar Holi, recreating a famous Hindu legend. According to the story, Lord Krishna is driven out of Barsana by his beloved Radha and her friends. Lathmar Holi is one of the first events taking place in the days leading up to Holi. 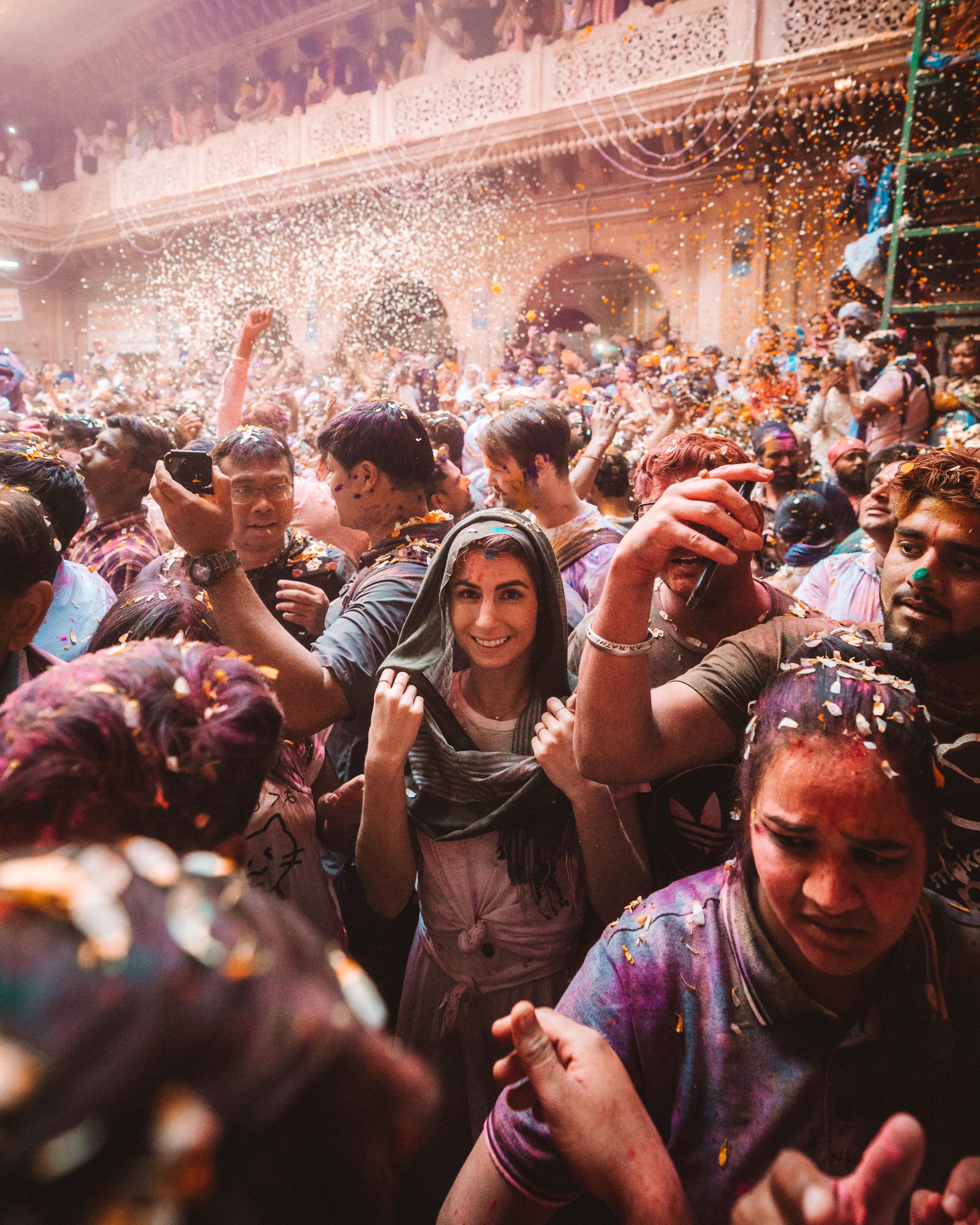 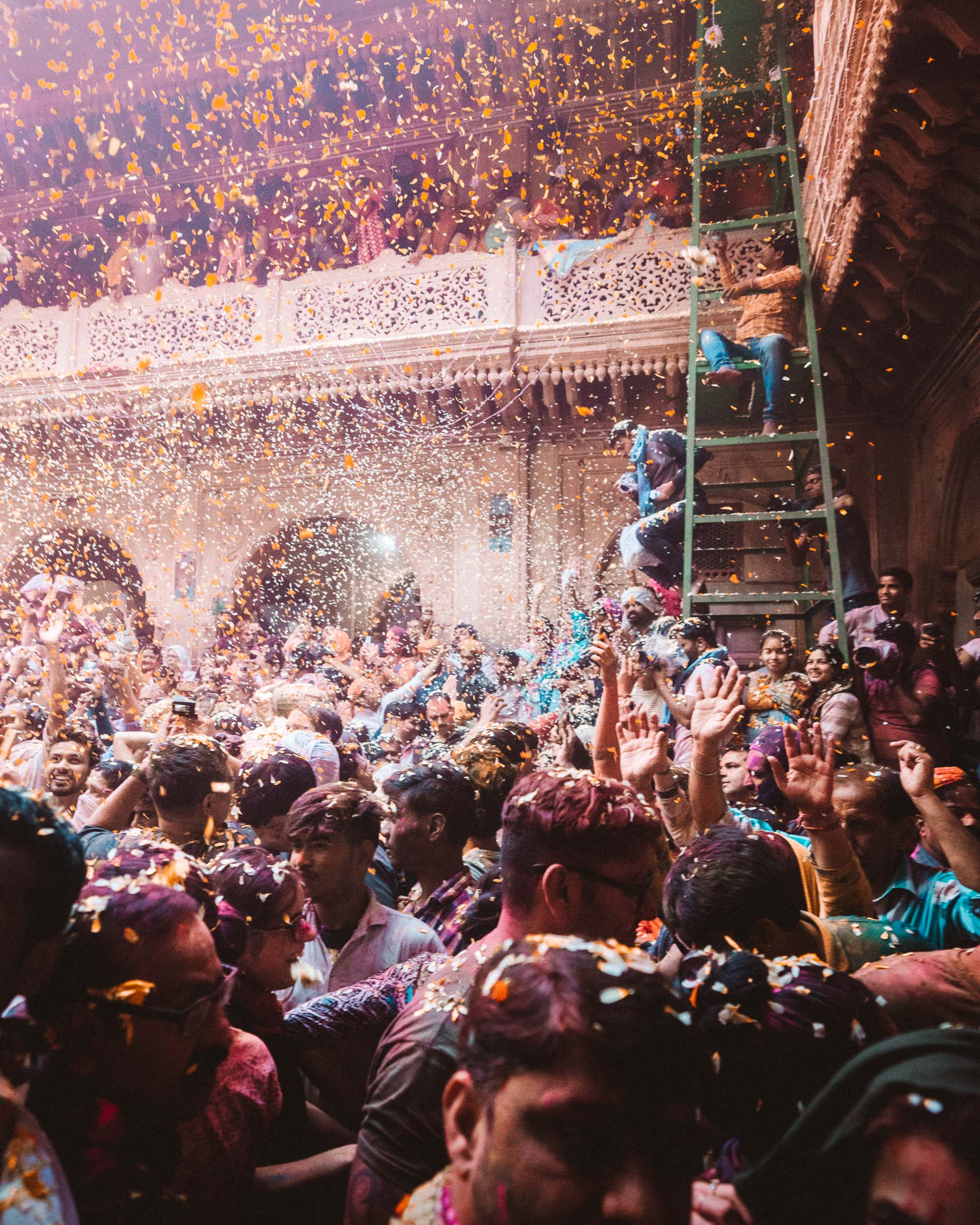 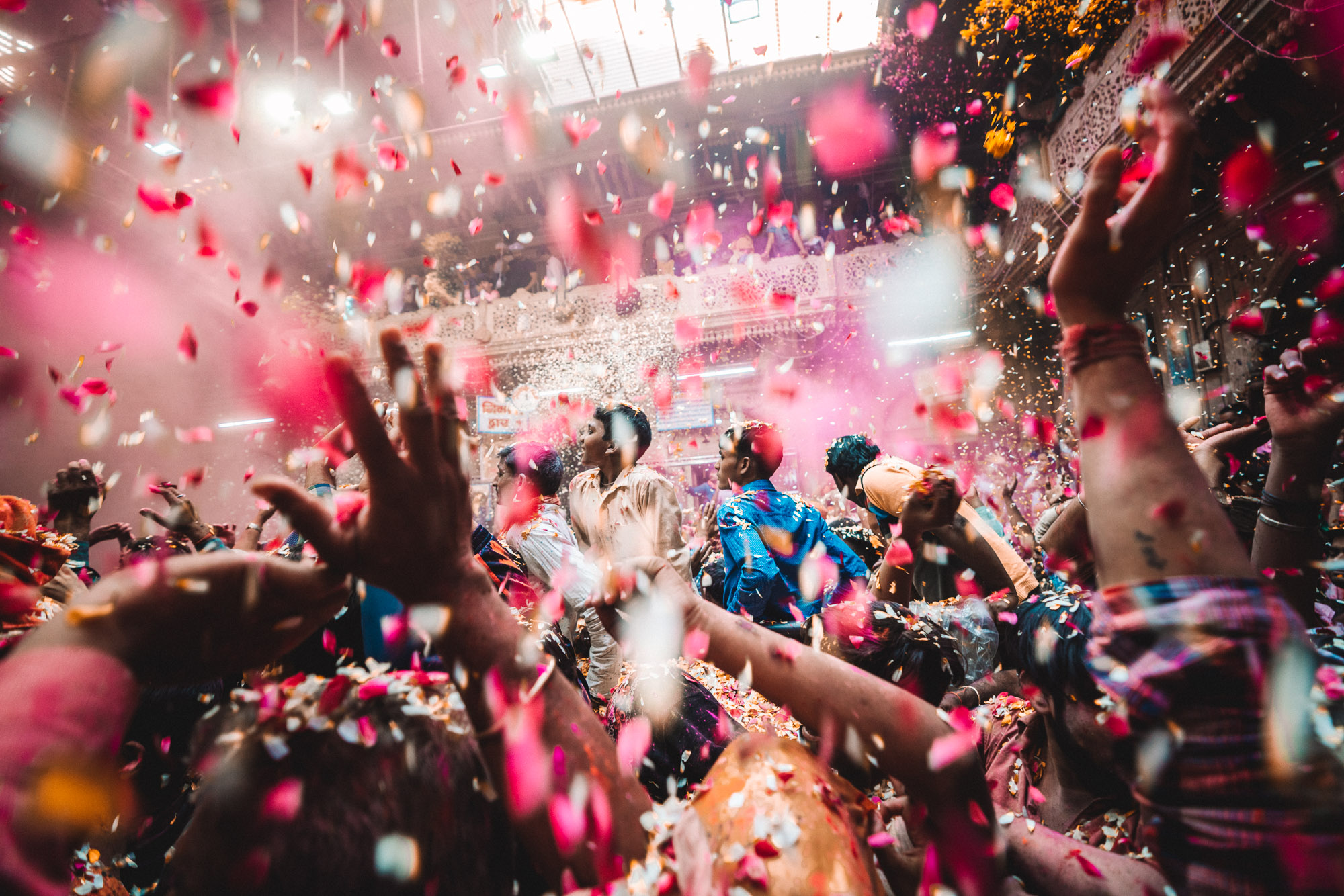 Phoolon Wali Holi involves the throwing of flower petals instead of dry or wet colors. The celebration lasts around 15-20 minutes total. The petals shower down in Banke Bihari Temple as locals invite the deities to play Holi with them. This event kicks off the start of week-long celebrations in Vrindavan and Mathura, leading up to the the day before Holi.

A new and ‘unconventional’ celebration, as widows in India can be ostracized by society. At Widow’s Holi, women break tradition to play Holi. This event can be hard to pin down, but if you can find out if it’s happening and where to attend, I’d go for it. 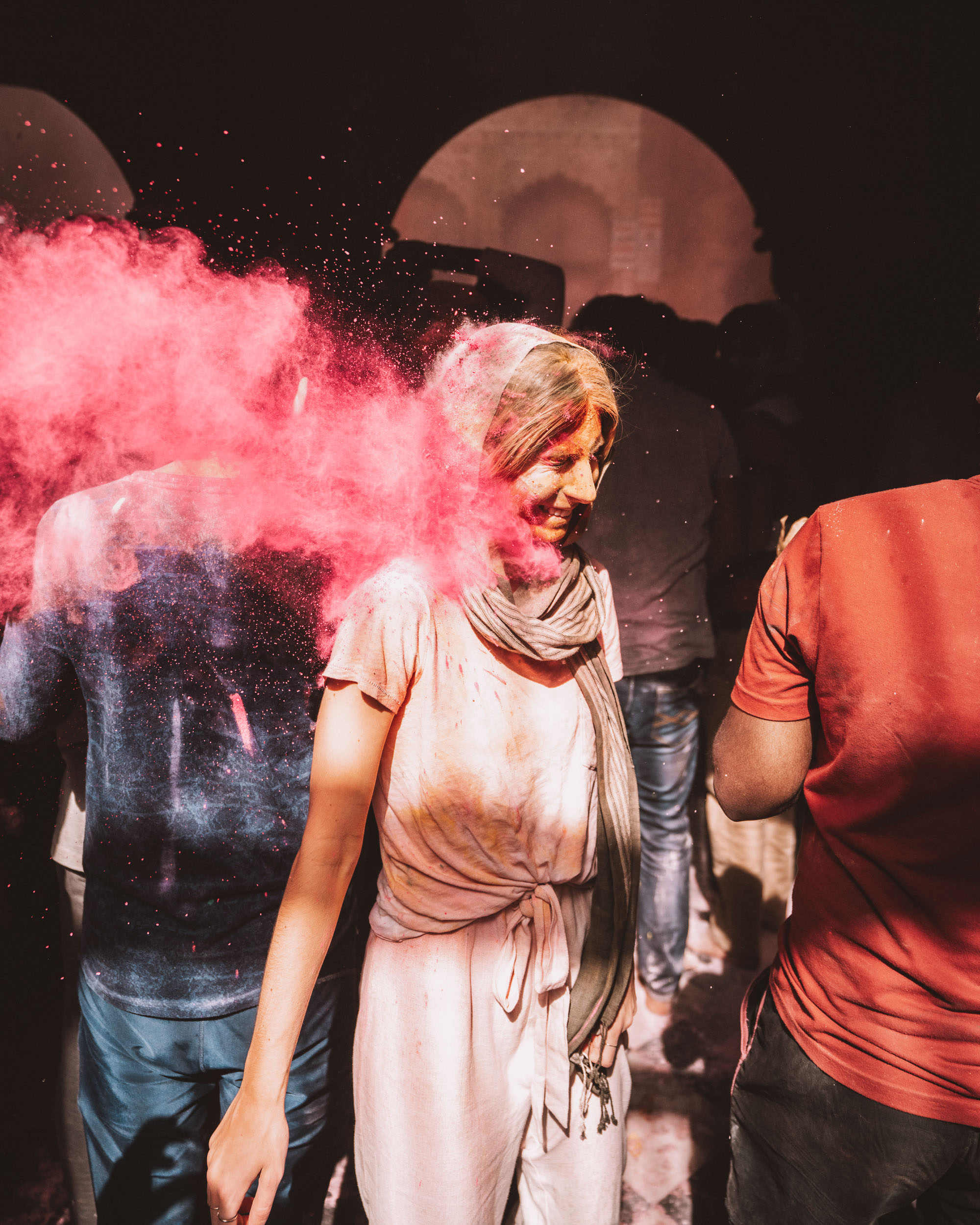 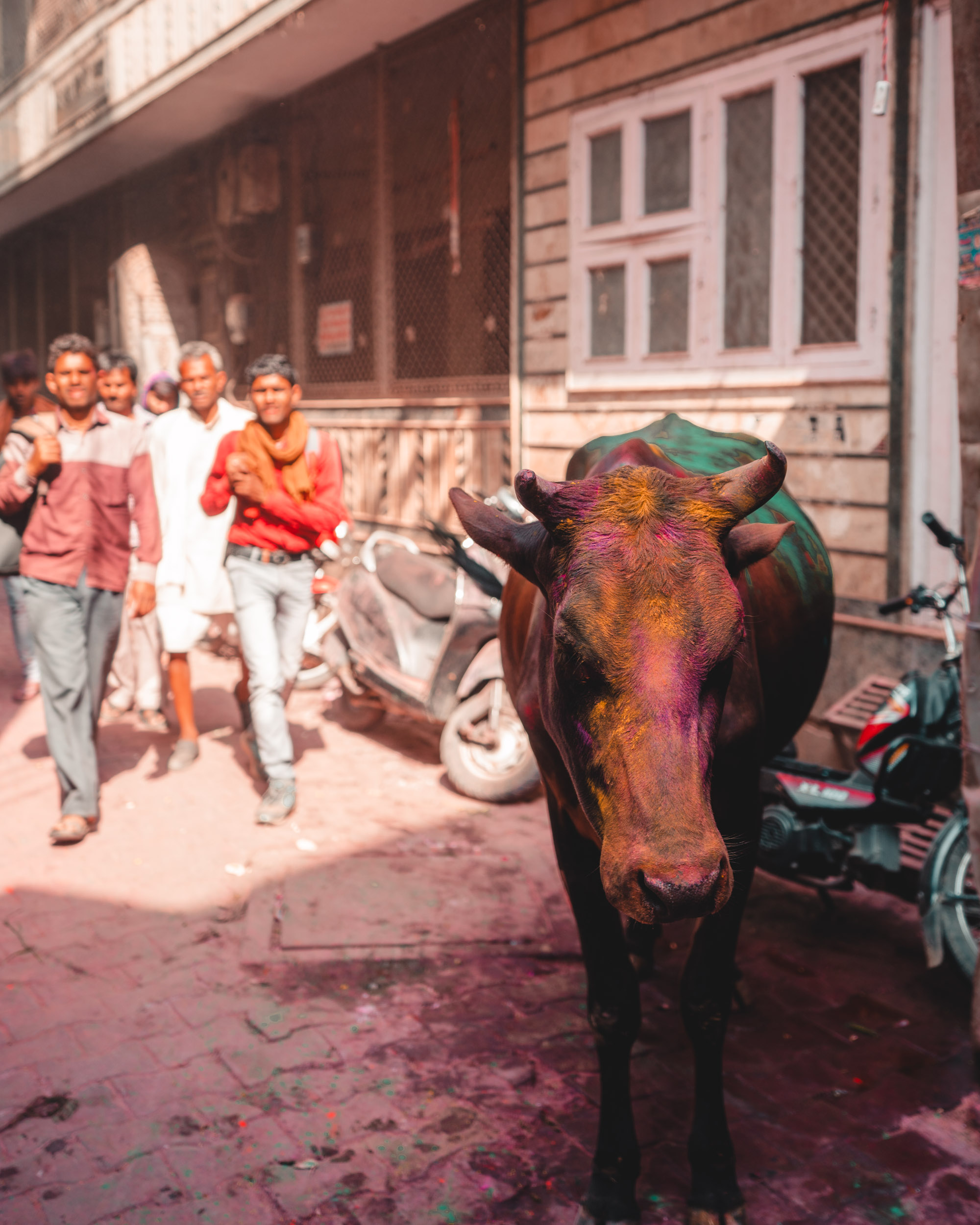 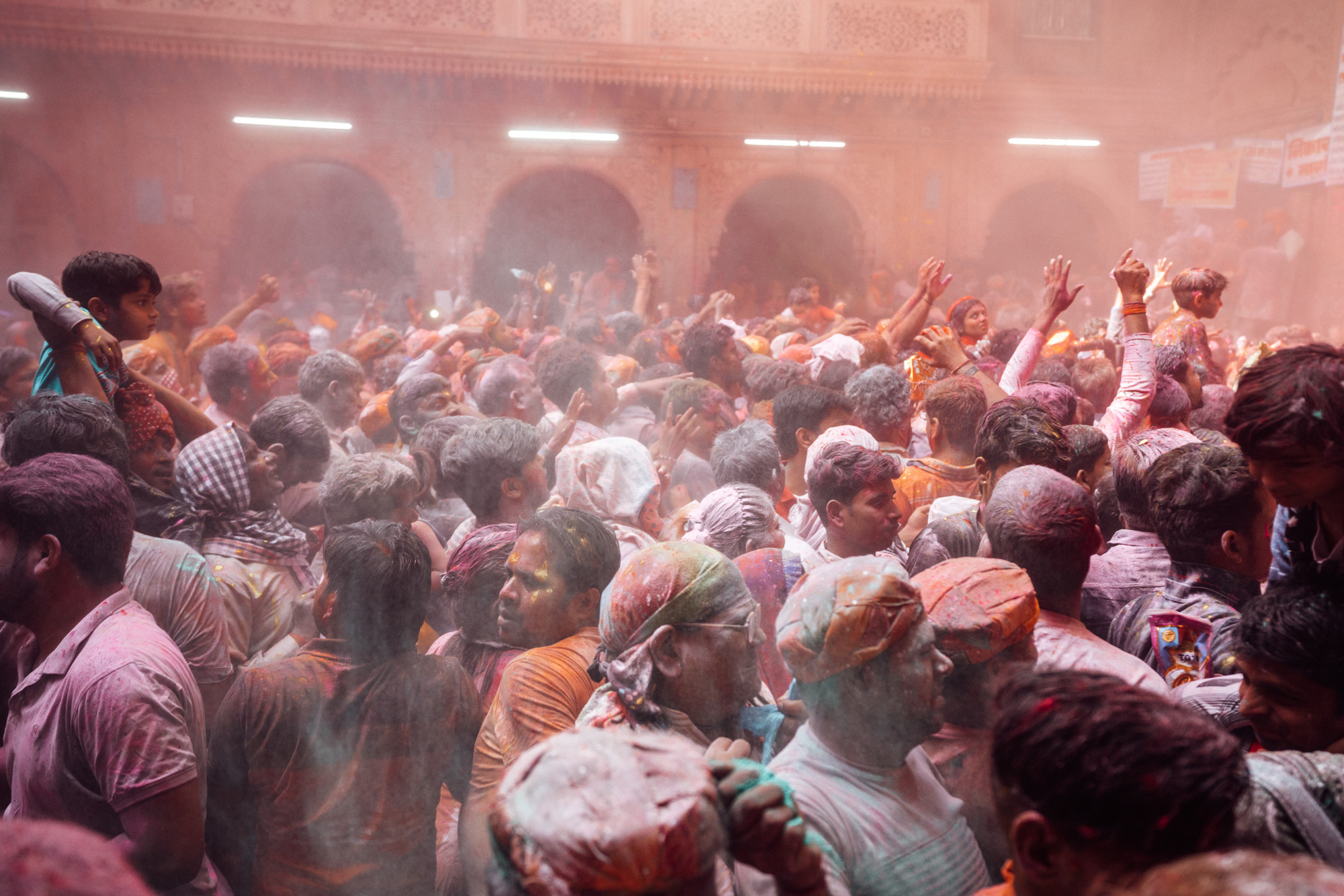 Numerous Holi festival events including Phoolon Wali Holi take place in Banke Bihari, the cultural and religious center of Vrindavan. As the days leading up to Holi draw on, they tend to get rowdier and more crowded. 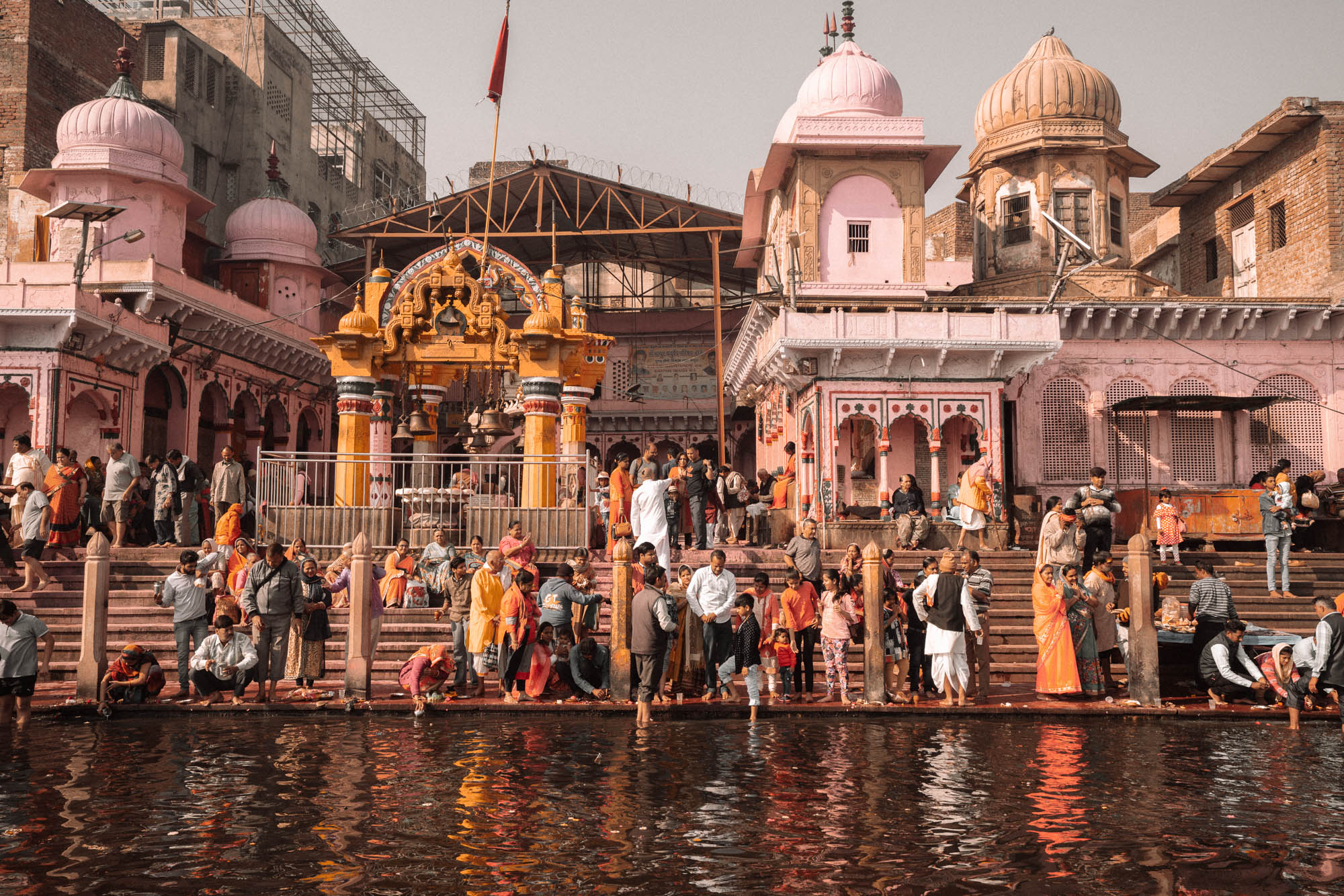 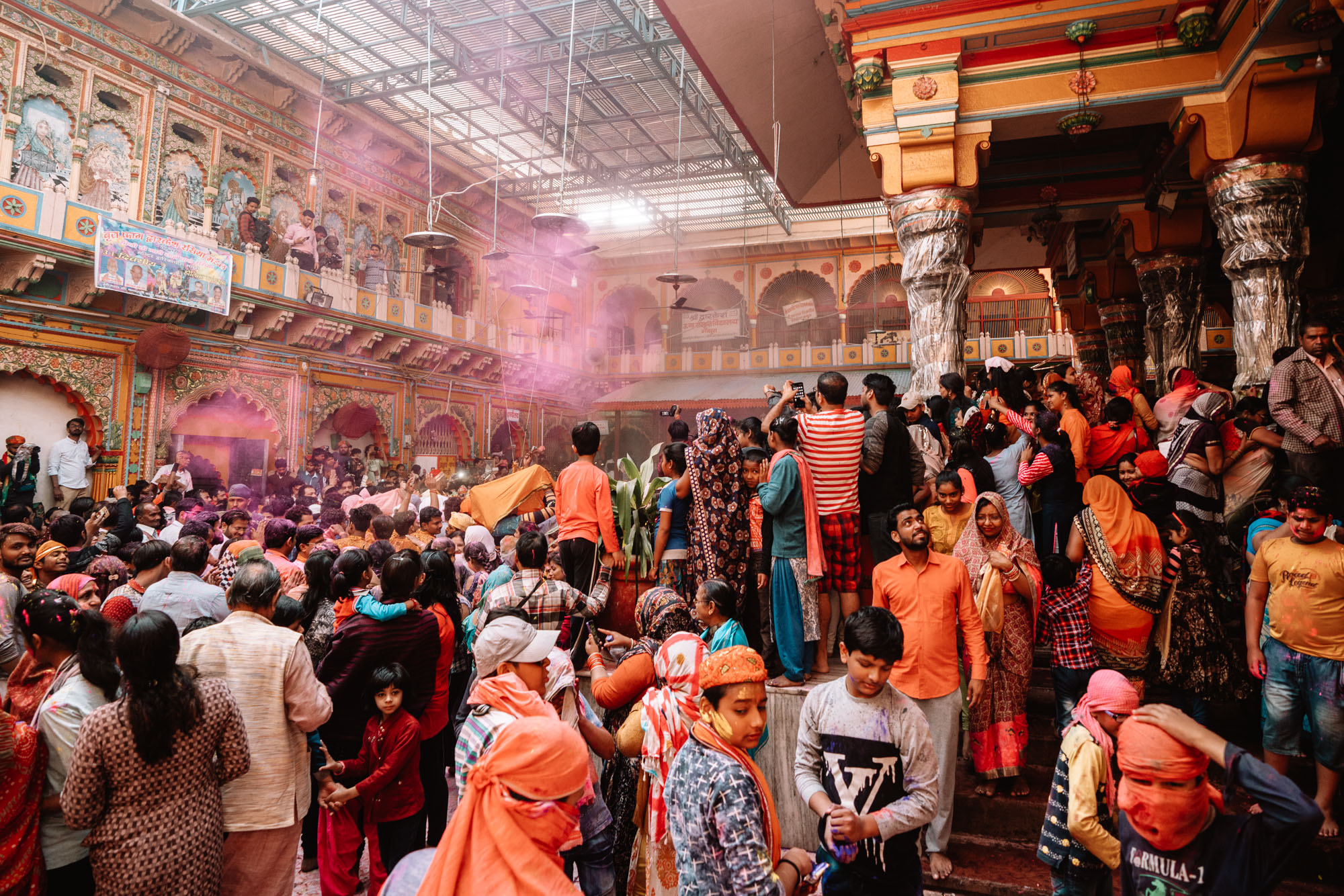 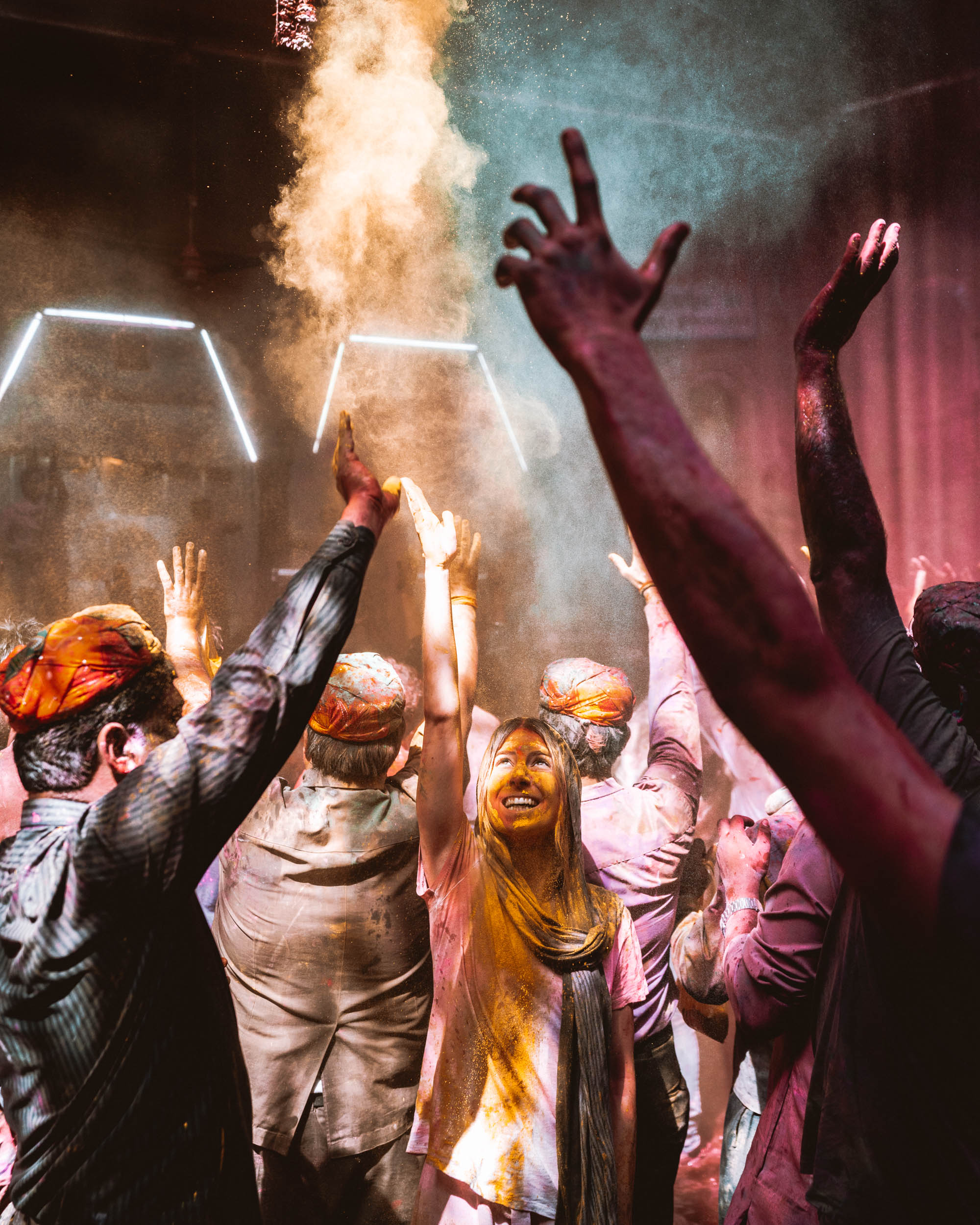 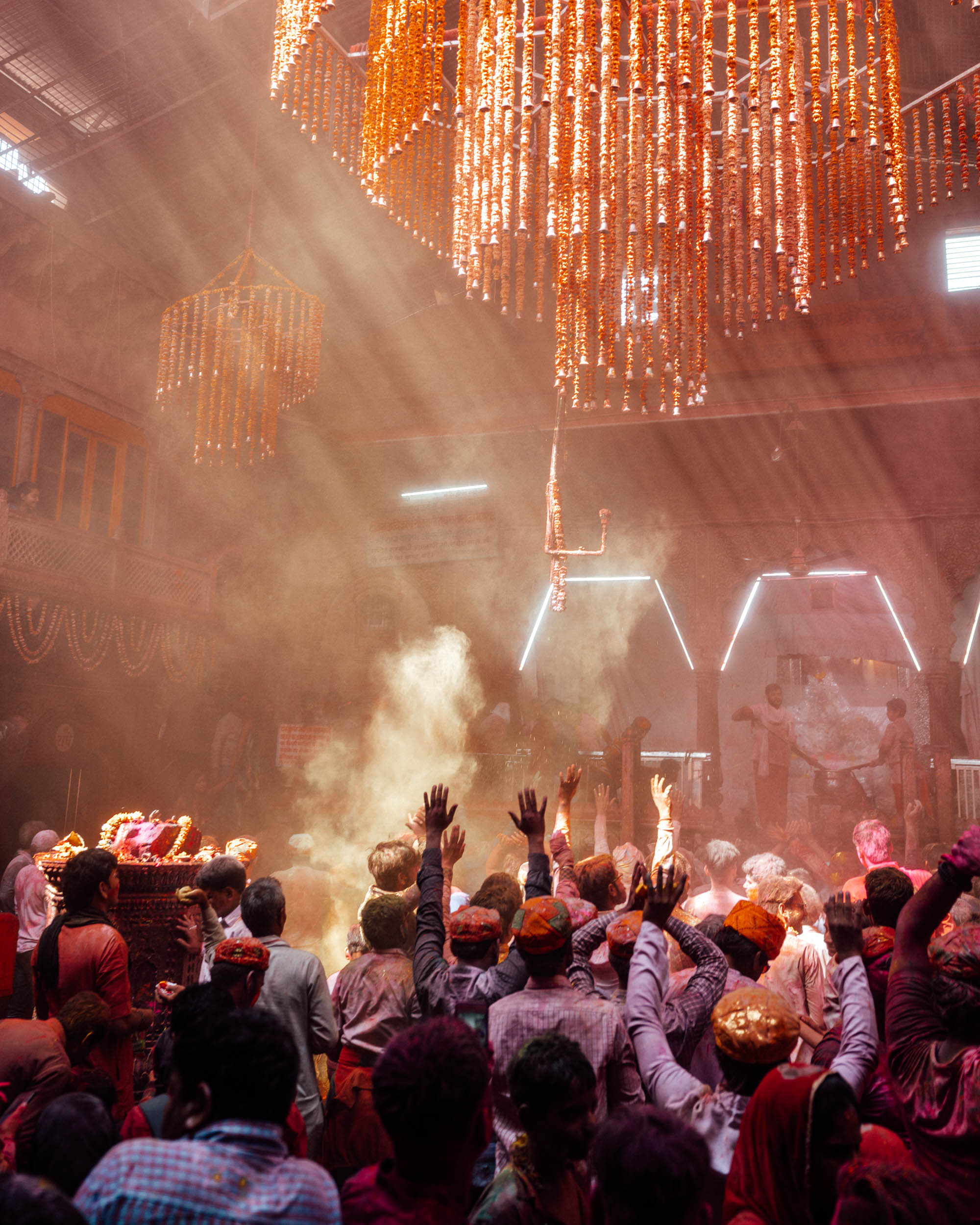 As the day of Holi festival draws closer, many celebrations get more intense and crowded. Our guide led us to this temple one afternoon and we stayed here playing Holi with the locals without the craziness of the streets and popular temples. A good option to keep in mind if you’re looking for something less intense in the days leading up to Holi!

Where to Stay in Vrindavan and Mathura

Vrindavan and Mathura are not frequently touristed cities. When we arrived by train, we were surrounded by locals and didn’t see another tourist until the next day. For this reason, there are not a ton of accommodation options and booking in advance is important to avoid being stuck with a hotel that only has a bucket in the bathroom (seriously).

We booked a month in advance and stayed at Brij View Hotel, one of the few in the area that was not full. It was very basic and located within an apartment complex. But, it had tasty food and a real shower. You will definitely want a decent bathroom to get rid of that Holi powder – trust me! I use booking.com throughout my blog because it allows you to cancel without penalties up to a certain day, which comes in handy for trips like this with flexible days. You can search for properties below.

In the days leading up to Holi you’ll often find yourself surrounded by crowds of people throwing colors in the main areas of Vrindavan and Mathura. I loved taking a day trip to Govardhan during our visit, a sacred Hindu site. Our guide showed us around this beautiful town and we also visited the Cenotaph of Maharaja Suraj Mal (horizontal image below), which is on the way to Govardhan. 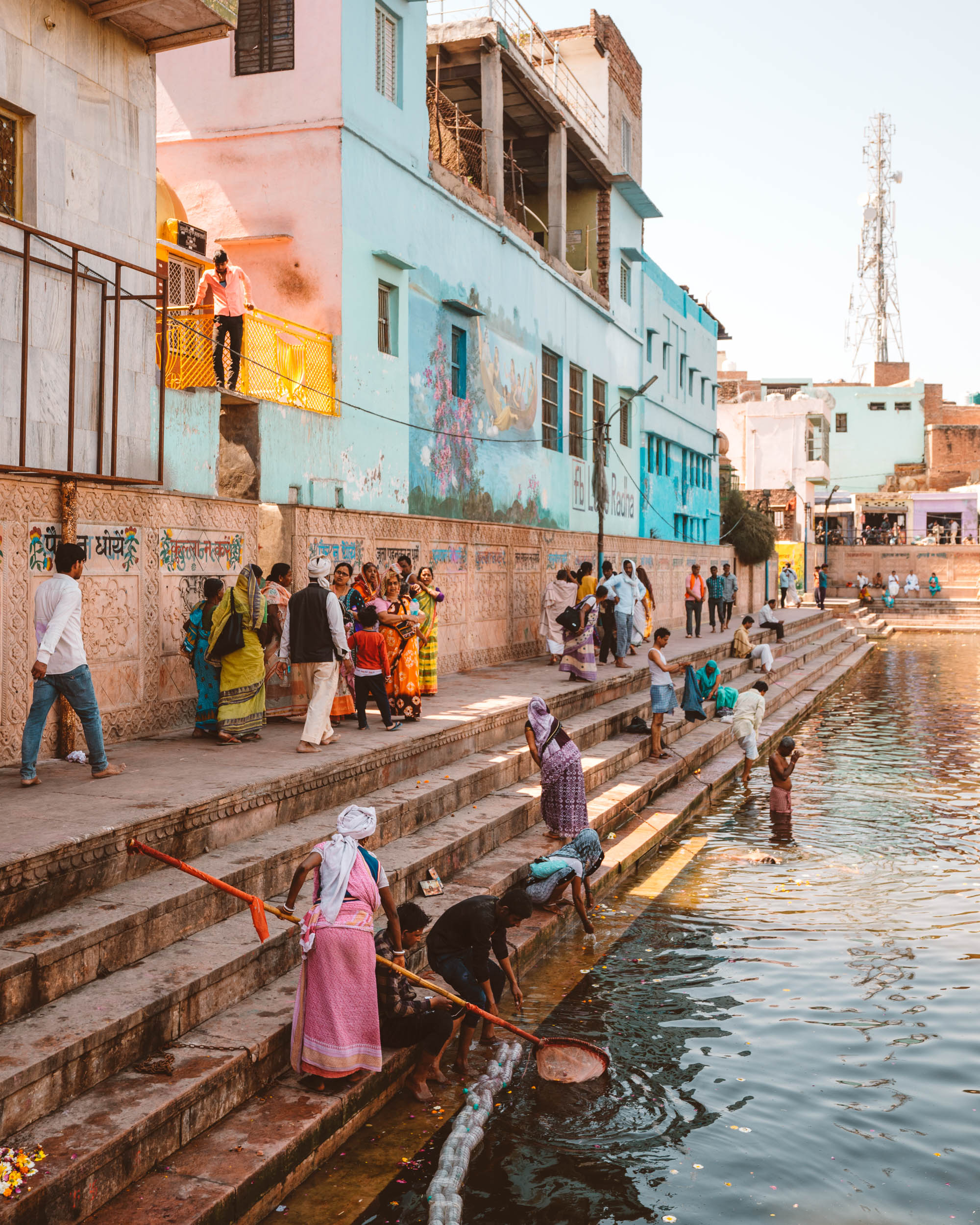 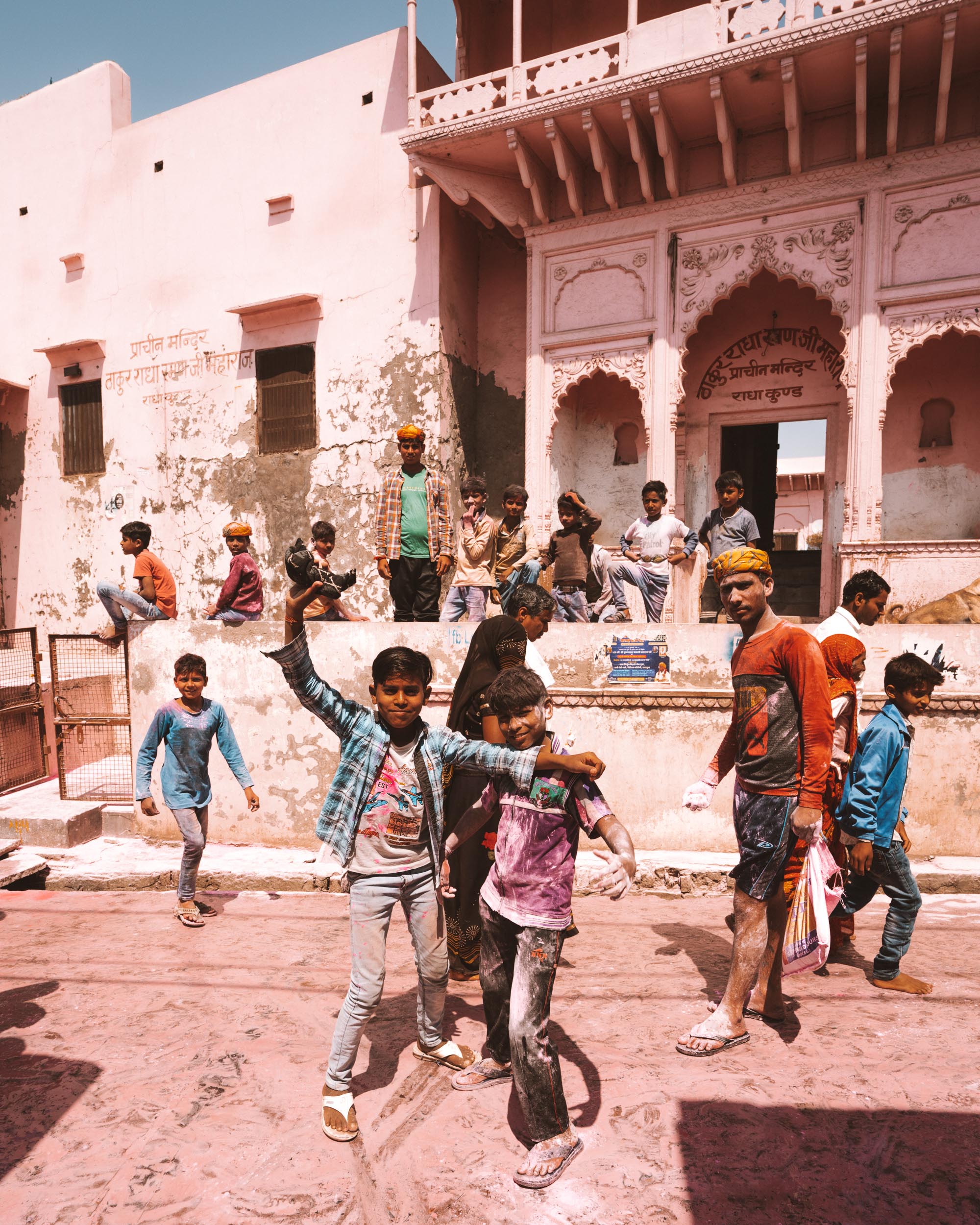 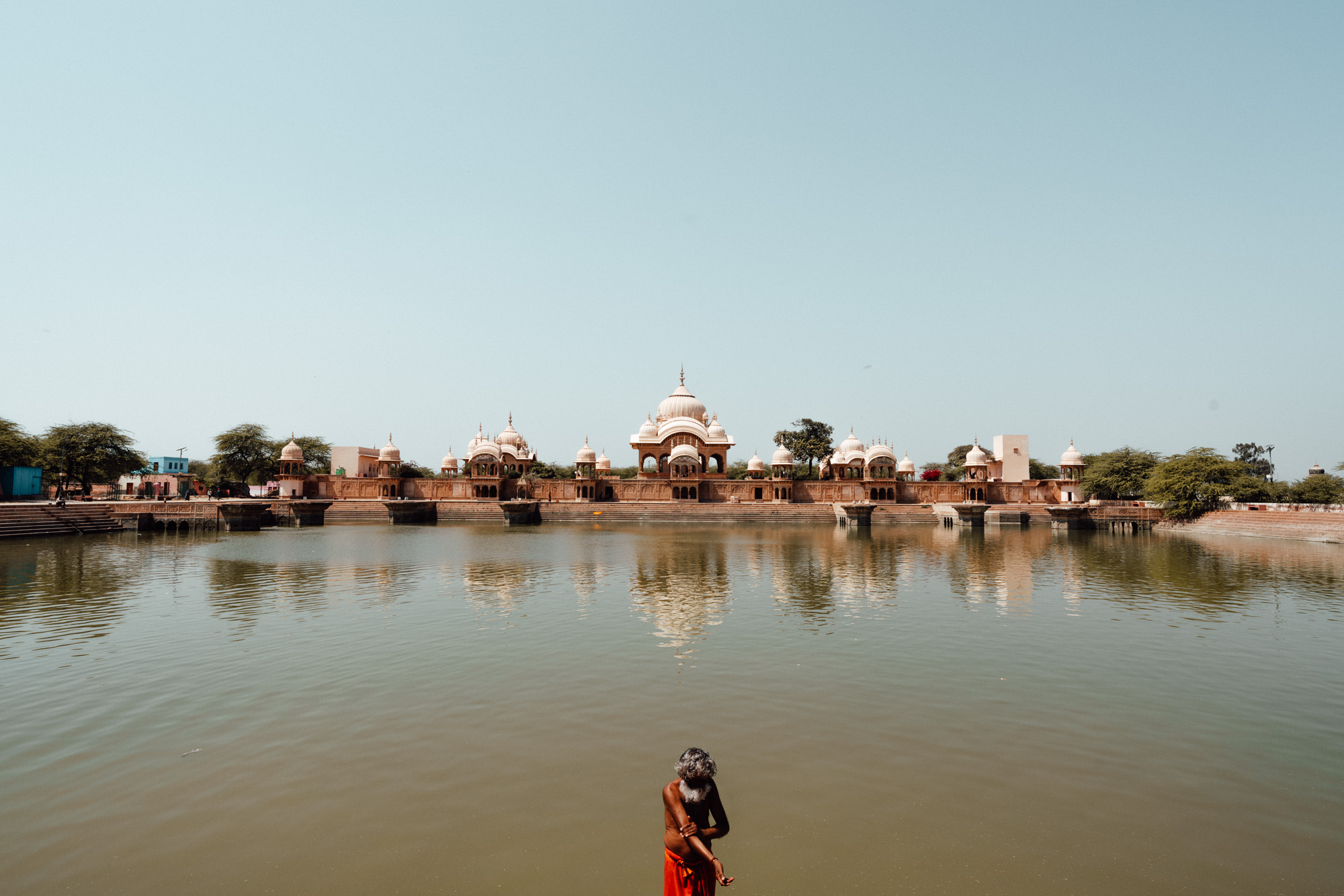 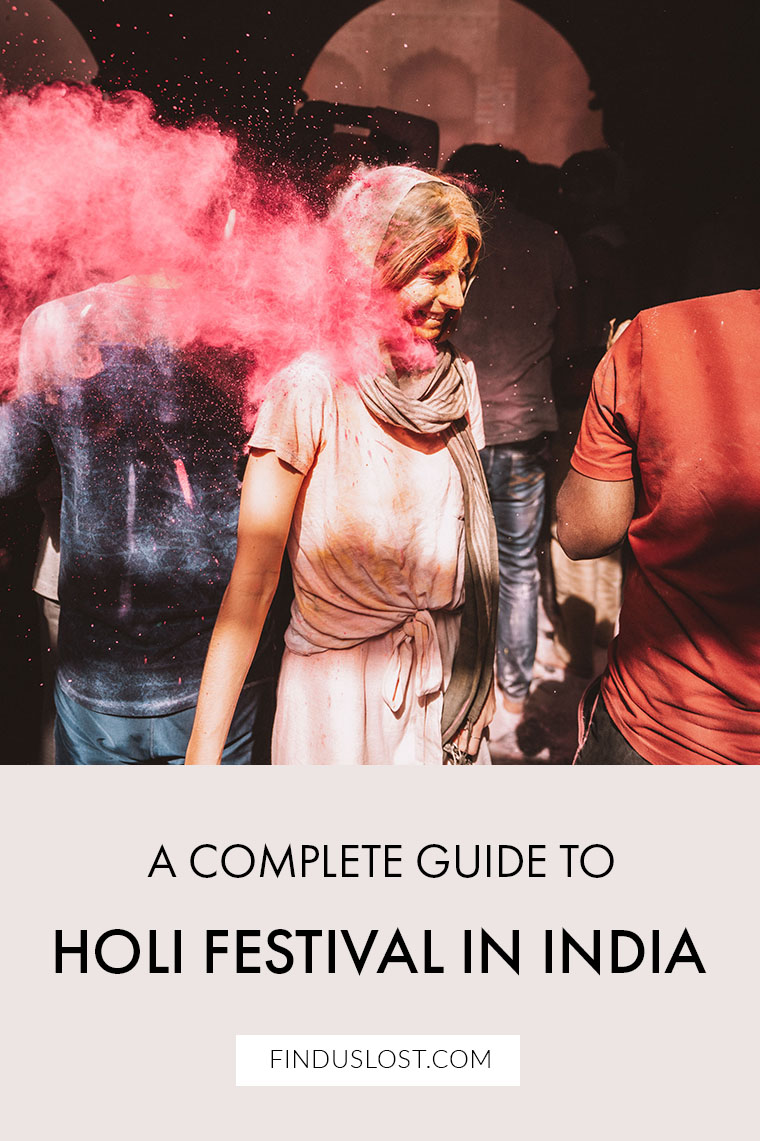 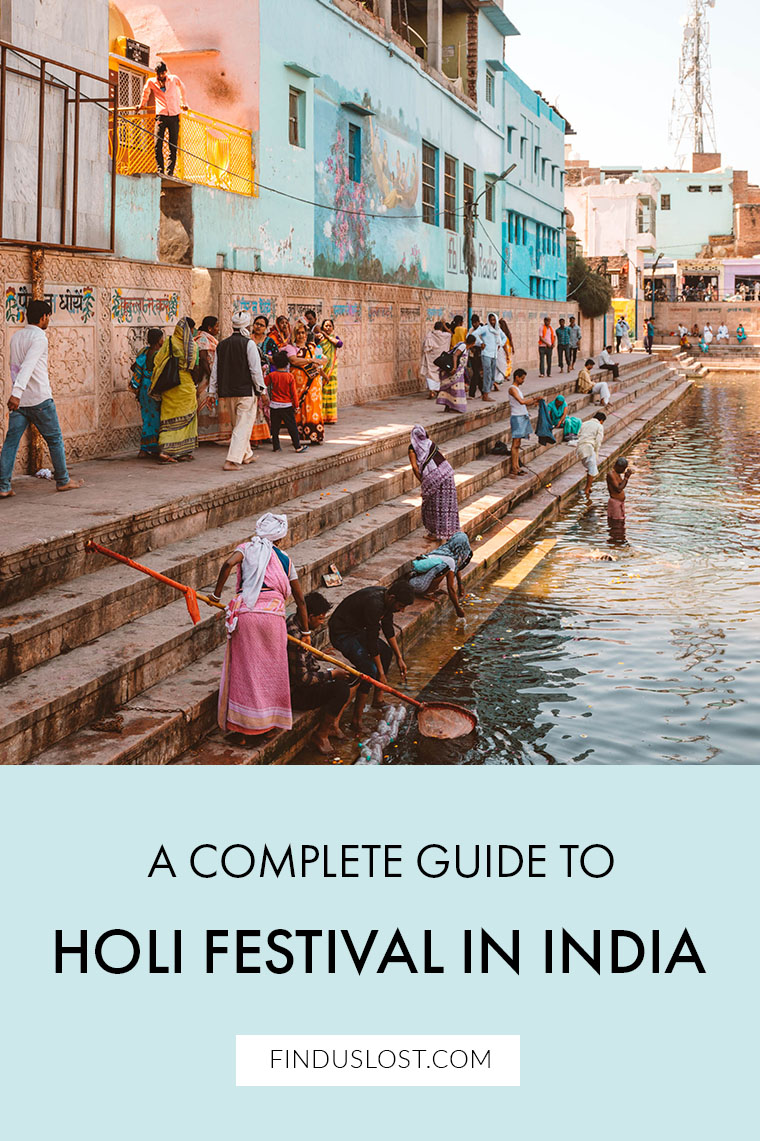 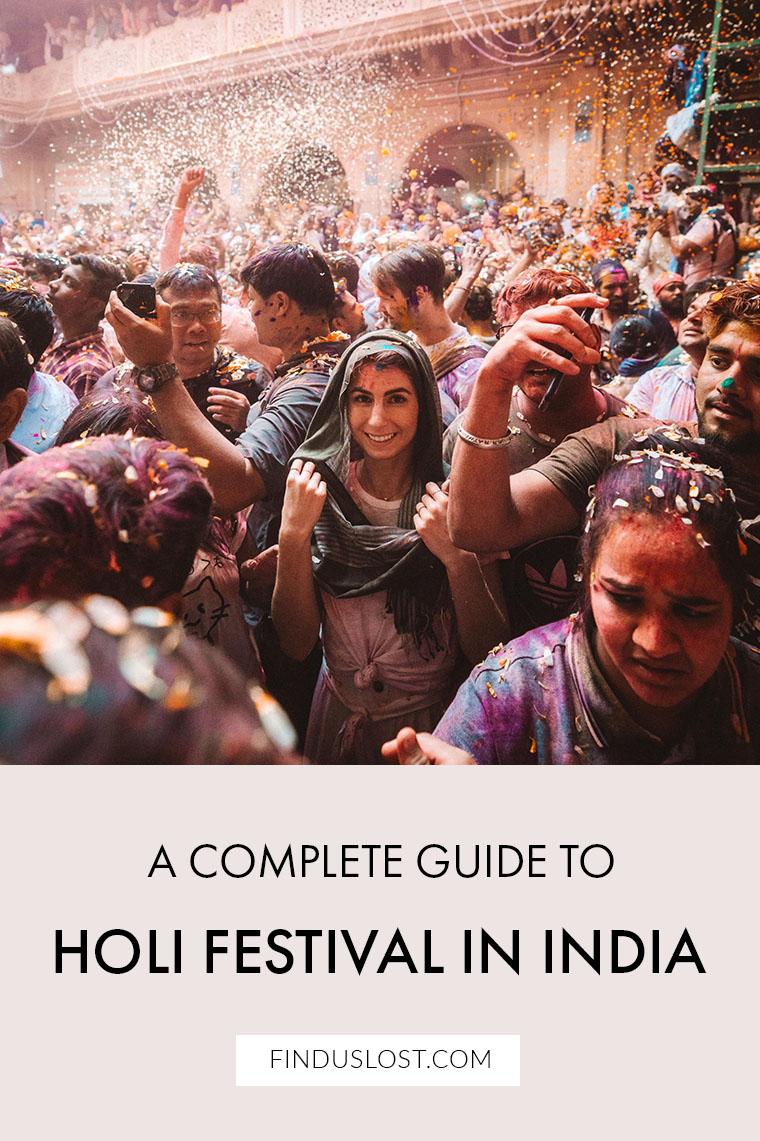 A Guide to Visiting the Gorges du Verdon in France